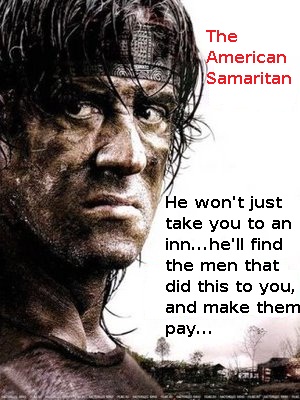 In a comment on yesterday’s post depicting a “Bad Samaritan,” it was suggested that there were ways of depicting a conservative American outlook that might be more accurate. It inspired the above image. What do you think? If the “Good Samaritan” in the story in Luke’s Gospel reflected conservative American values, rather than those of Jesus and early Christianity, do you think the character would have set off on a quest of retribution against those who left a man for dead alongside the Jericho road?

December 30, 2012 School Prayer Contradiction
Recent Comments
13 Comments | Leave a Comment
Browse Our Archives
get the latest from
Religion Prof: The Blog of James F. McGrath
Sign up for our newsletter
Books by This Author Books by James F. McGrath