It is not infrequent to hear self-centered pseudo-Christians justifying their lack of concern for the poor by appealing to Jesus’ statement, “The poor you shall always have with you.” 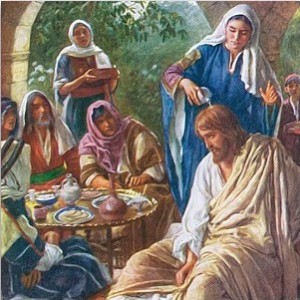 The full statement, as those concerned about context know and emphasize, is “The poor you shall always have with you,  and you can help them anytime you wish; but me you shall not always have with you” (Mark 14:7). In its immediate context, therefore, the point is not about poverty being impossible to eliminate, but about that occasion being a unique one in history. Helping the poor can be done at any time; symbolically anointing Jesus beforehand for burial could only be done then.

That is reinforced by the verse that Jesus is depicted as echoing, Deuteronomy 15:11, which says,  “Since there will never cease to be some in need on the earth, I therefore command you, “Open your hand to the poor and needy neighbor in your land.””

But there is a broader context even than that, as Fred Clark reminded us yesterday, the context of the entire passage in Deuteronomy. Deuteronomy 15:4 says that there should be no poor in the land if God is being obeyed. Why? Because there were laws, such as the Jubilee law, that ought to have eliminated poverty.

And so Jesus’ words not only do not mean what some today claim, namely that trying to eliminate poverty is futile because it cannot be done. Quite the opposite! They echo a passage which says that a society ought to make poverty disappear if it is obeying God, and that if even so someone falls upon hard times, they should be helped.

This is yet another example of the disturbing phenomenon of people quoting Scripture and presenting themselves as standing for the Bible, when in fact they are using the Bible selectively in order to undermine the overall message of the Bible. They are clearly more like Satan tempting Jesus in the wilderness using Scripture, than they are like Jesus himself. I can only hope that more people will come to recognize this.

May 31, 2013 Is Claiming the Holy Spirit as Author of the Bible an Unforgivable Sin?
Recent Comments
0 | Leave a Comment
Browse Our Archives
Follow Us!