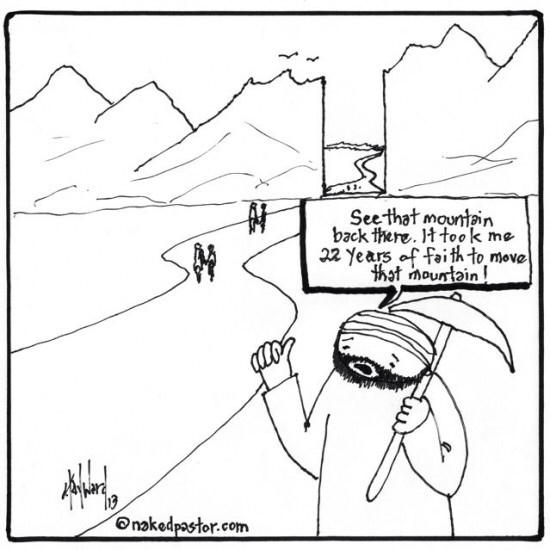 David Hayward's latest cartoon has a real life story behind it. Dashrath Manjhi lived in a remote part of Bihar, India. Because of a mountain range with no road through it, when his wife needed urgent medical help, she died, because help could not reach her in time. And so he spent more than the mext two decades making a path through the mountain, with his own hands.

That's a key part of the message of the song I wrote, “Your Kingdom Come.” Just hoping for change or believing that change will come through some other means is not enough: we ought to be involved in bringing about the change we want to see in the world.

I often emphasize, when teaching on the Book of Revelation, that the early Christians were poor and lived in a context that was not democratic in the modern sense, if any. And so, unless they were to take up arms to change certain things, they had few options other than to simply long and hope for God to act. When Christians today use their expressions of that viewpoint in the Bible to justify inaction by wealthy Christians living in a democracy today, I find it disappointing, even sickening.

Many Christians today think that faith is “believing,” and more specifically believing the unbelievable. But within the Bible and down the ages, the term had more to do with a response of faithfulness to what was believed. That is why Hebrews 11 is not merely a list of people believing propositions that others do not, but being motivated by their beliefs to act in ways that others did not.

I hope we can move away from faith that merely hopes that mountains will eventually or miraculously move, to a faith that motivates us to move mountains, one stone at a time over many years if necessary.

June 21, 2013
More on the Ridiculousness of Left Behind
Next Post