Young-Earth Creationists are Without Excuse

Joel Watts drew my attention to the fact that an individual named Tony Breeden, with whom I had been interacting on his blog, mentioned me on Facebook: 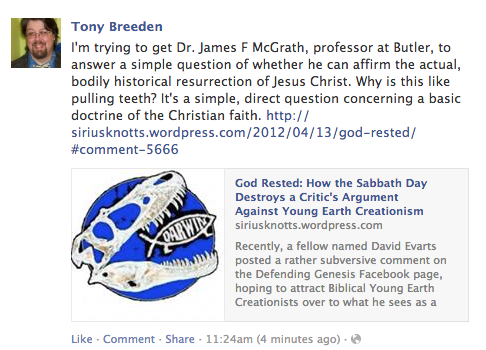 My response was to ask whether, if I gave a simple “yes” answer and said nothing more, he would be satisfied and would return to the topic, or would then ask about what I mean by bodily, and by historical, and use other follow-up questions to distract from the topic at hand.

Breeden has suggested that his reason for asking the question is that he wants to know whether he is interacting with a fellow Christian or an unbeliever. Clearly Breeden is looking for an excuse that can be used to dismiss things that I say and evidence I present. I find that reprehensible.

Romans 1:19-20 shows how different Breeden’s “Christianity” is from that of St. Paul:

[W]hat may be known about God is plain to them, because God has made it plain to them. For since the creation of the world God’s invisible qualities—his eternal power and divine nature—have been clearly seen, being understood from what has been made, so that people are without excuse.

It is frustrating when representatives of a viewpoint that is so thoroughly unbiblical set themselves up as though they themselves were the defenders of the Bible and of Christian orthodoxy.

August 2, 2013 Blessed Quietness Journal
Recent Comments
12 Comments | Leave a Comment
"I don't want to defend any version of mythicism. I'm simply trying to evaluate whether ..."
VinnyJH Was Paul Uninterested in the Historical ..."
"Church is pointless."
Nixon is Lord New Book: #WhatIsGodLike by Rachel Held ..."
"You're shifting the discussion to a different topic here. Would we be able to tell ..."
James F. McGrath Was Paul Uninterested in the Historical ..."
"These discussions are going to be a waste of time unless you decide which variety ..."
David M Was Paul Uninterested in the Historical ..."
Browse Our Archives
get the latest from
Religion Prof: The Blog of James F. McGrath
Sign up for our newsletter
POPULAR AT PATHEOS Progressive Christian
1