A friend shared this screenshot from the movie Hellbound? 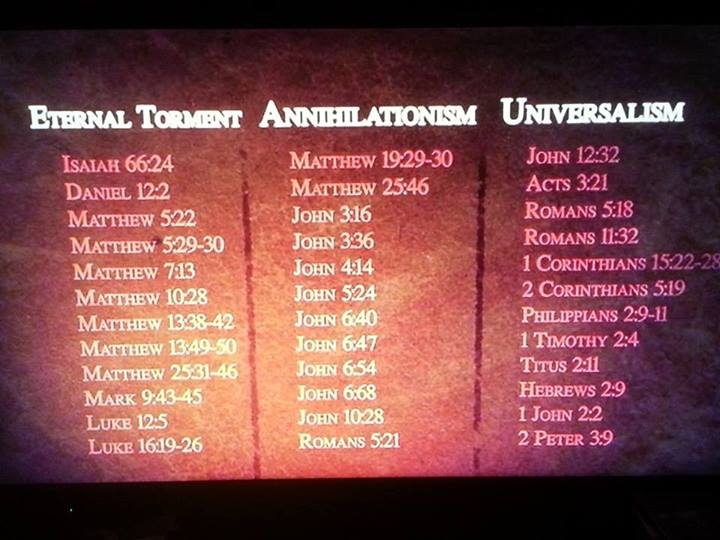 I would dispute whether some of these texts clearly belong in the particular category in which they are placed (although if I recall correctly, in the movie the point of the chart was not to say that these prooftext support these views but simply to indicate that each view has prooftexts which seem at first glance to support it). I would also point out that the diversity of the Bible encompasses more than these three views – most of the Hebrew Bible doesn't envisage an afterlife at all. But it is still a useful image as a starting point for discussion.

And even for those inclined to harmonize them, “interpreting Scripture in light of Scripture,” the question must be asked as to why you start with the particular set of texts you do and harmonize the others to them, rather than harmonizing the texts you chose to start with to others that seem to mean something else.

September 16, 2013 Limits to Religious Freedom
Recent Comments
3 Comments | Leave a Comment
"As a foreigner looking at American politics, I'm bemused at how similar both sides are ..."
Harold Porter Prove It
"Thank you for pointing out that I hadn't finished that thought, or that something got ..."
James F. McGrath Warning Labels for Christianity?
"It's kind of a weird phenomena to try to pin down. Most people think it ..."
John MacDonald Prove It
"Dr. McGrath, thank you for this useful and interesting post. I must ask, was part ..."
Charles Ragland Warning Labels for Christianity?
Browse Our Archives
get the latest from
Religion Prof: The Blog of James F. McGrath
Sign up for our newsletter
POPULAR AT PATHEOS Progressive Christian
1