The Tyranny of Fundamentalist Language (and More)

Race Hochdorf has a new website which readers will find interesting, and on it a new post, “The Tyranny of Fundamentalist Language.” He writes:

The reason why it is impossible to debate a fundamentalist, is because their very language psychologically traps them into their frames of mind.

Click through to read the whole thing, including why he views fundamentalists with pity.

In a similar vein, Unreasonable Faith asks when fundamentalists came to be accepted as the spokespersons for religion. See also Fred Clark on the same topic. And Scot McKnight asked who won the 20th century – liberals or fundamentalists? In the process, he reminds us that once liberal voices predominated and fundamentalism was a marginal phenomenon viewed with ridicule and disdain.

Roger Wolsey listed ways that progressive Christians approach the Bible. Unreasonable Faith and Alden Swan also chimed in. Marcus Borg posted on what the Bible is, saying that the Bible “is all a human product. And yet it is “treasure” in an earthen vessel. It is the witness and testimony of our spiritual ancestors.”

Dan Wilkinson asked whether Biblical truth is all that matters.

Rachel Held Evans noted how often in the past the Bible seemed clear to people in ways that seem clearly wrong to most today. See also the thoughts on that post at Prophets and Pop Stars.

Robert Rock pondered whether a progressive form of Christianity might not be at least as old as another.

James Tabor shared some statistics on where the Bible is most and least read in the United States.

I also came across this interesting discussion of the Bible, including Francesca Stavrakopoulou: 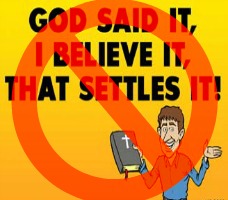