Ken Ham and Bill Nye: Who is on the Bible’s Side?

Ken Ham says that there is genuine scientific debate about “molecules to man” evolution. The very phrase that he uses shows that his real target isn’t evolutionary biology. He is trying to undermine Christianity and the Bible. He is trying on the one hand to deny that human beings are composed of molecules, something so undeniable that for Christians to reject it makes Christianity a laughing stock. And he is trying on the other hand to deny that God can turn molecules into human beings, despite that being a clear teaching of the story in Genesis.

Bill Nye, on the other hand, does not treat the Bible as though it is supposed to answer scientific questions, but neither does he suggest that it ought to be in a manner that brings the Christian faith into disrepute. And so it is arguable that he is the one who is treating the Bible better, if the choice is between him and Ken Ham.

As presumably everyone knows by now, the “Ham on Nye” debate is taking place later today. I won’t try to predict the outcome in terms of its impact. But one thing that is clear is that questions pertaining to evolution are settled through research in laboratories and on paleontological digs, investigating the genome and other relevant matters, not by who can score the most points in a debate.

My biggest hope in all this is to see lots of vocal Christian supporters of Bill Nye. There will be too many supporting Ken Ham simply because they think he represents “their team.” But that is only true if their team is “whoever wears the Christian label” and not “whoever is speaking the truth in this context.” Those who call themselves Christians do not always stand for truth – we should, but we do not. And non-Christians are not always opposed to the truth – especially in contexts in which there are Christians who have embraced lies and deceptions.

Will you be watching the debate live?

Here are some other things on the subject from around the web:

Biologos has a “pre-game analysis” along the lines of sports commentary.

Questioning Answers in Genesis advises Bill Nye not to teach the false dichotomy. David Macmillan makes a similar point as he shares his past adherence to young-earth creationism. And Michael Zimmerman brings Evolution Weekend into the picture.

Jason Rosenhouse continues his discussion of probability and evolution.

RJS looks at the intersection between faith and neuroscience.

If you are interested in ancient Jewish “science” there is a free book you can read online.

Christian Piatt shared some church signs, including this one, which poses the same false dichotomy that motivates charlatans like Ken Ham: 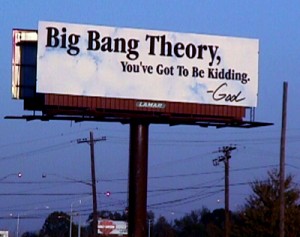 February 4, 2014 The Value of a Liberal Arts Education
Recent Comments
14 Comments | Leave a Comment
"We can see with our eyes now when an egg and a sperm meet it ..."
Carol Bracken The Immorality of “Pro Life”
"Thanks."
Scurra Online Event: Doctor Who in ‘Flux’?: ..."
"It's always worth remembering the there is no authentic and original first century originated evidence ..."
rationalobservations? Attacking the Bible
"On two occasions, Abraham offended his hosts, causing them serious injury. Both Pharoah and Abimelek ..."
Joseph Douglas Attacking the Bible
Browse Our Archives
get the latest updates from
Religion Prof: The Blog of James F. McGrath
and the Patheos
Progressive Christian
Channel
POPULAR AT PATHEOS Progressive Christian
1