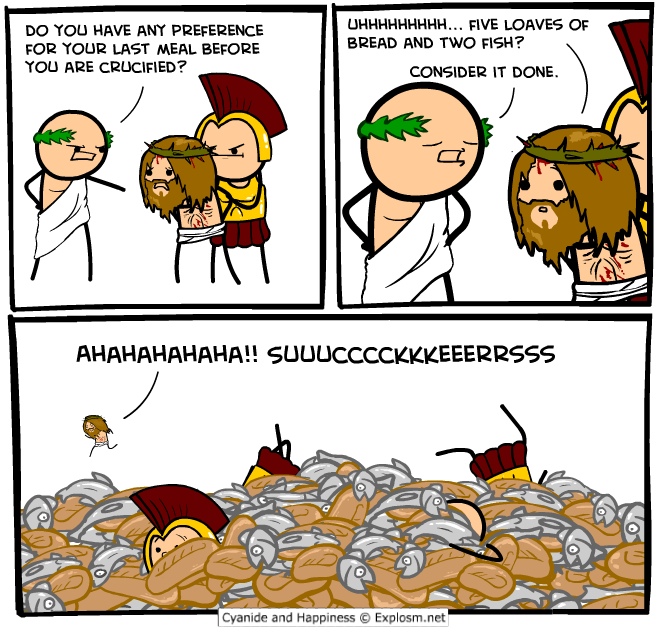 This Cyanide and Happiness cartoon can actually lead to discussion of a serious point (believe it or not). Traditional Christian theology has depicted Jesus as willingly embracing crucifixion. One Gospel has Jesus suggest that he could simply have called a legion of angels to save him had he wanted to.

Presumably the Jesus who emphasized not repaying evil with evil, and who had miraculous powers at his disposal, might be expected to do something more along the lines of what the cartoon depicts, than what Matthew suggests? On the one hand, it emphasizes his own ability rather than depending on angels, while on the other, it doesn't involve violent retaliation.

In my Sunday school class this past weekend, we talked about the problems with suggesting that the cross accomplished forgiveness that God could not extend previously. It makes more sense to see it as an expression of the ever-present character of divine forgiveness. In the cross we see a vision of a God who allows his chosen one to be tortured and killed and yet does not destroy those who carry it out. It doesn't make forgiveness possible, but presupposes that it already is, and demonstrates the extent of grace.

If that does not undermine depictions of God as hateful then nothing will – except perhaps a depiction of God's anointed one escaping by multiplying food rather than resorting to violence. But I still think the traditional version is more powerful.

February 4, 2014 Ken Ham and Bill Nye: Who is on the Bible's Side?
Recent Comments
0 | Leave a Comment
"I like the new version of Jesus's appearance. Of course, all versions are speculative, but ..."
ElsieAnne Why Jesus was Made White
"It's worth remembering that there's absolutely no authentic and original first century originated historical evidence ..."
rationalobservations? Why Jesus was Made White
"The article is right, but let us also remember that every civilization has seen Jesus ..."
jimoppenheimer Why Jesus was Made White
"Yes, apologists love to float Plantinga’s philosophical credentials, but usually their use of him ends ..."
Beau Quilter Because of the Fall: More on ..."
Browse Our Archives
get the latest from
Religion Prof: The Blog of James F. McGrath
Sign up for our newsletter
POPULAR AT PATHEOS Progressive Christian
1