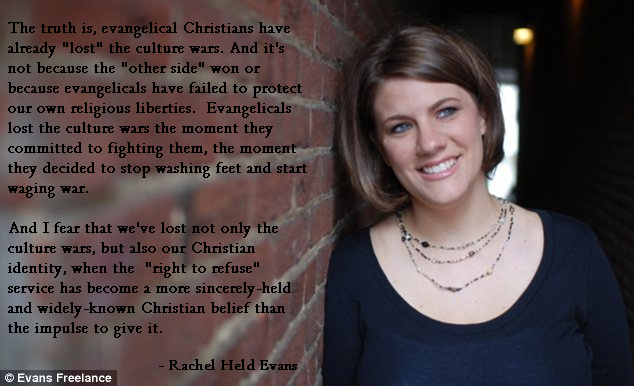 And I fear that we’ve lost not only the culture wars, but also our Christian identity, when the  “right to refuse” service has become a more sincerely-held and widely-known Christian belief than the impulse to give it.

The above quote from Rachel Held Evans comes from the post “Walking the Second Mile.”

March 1, 2014
What Makes Someone Become a Biblical Inerrantist?
Next Post

March 1, 2014 Did Bill Nye Help Fund the Ark Park?
Recent Comments
2 Comments | Leave a Comment
"These fake dinosaurs are a lot more authentic to the real ones than the Creation ..."
Jennifer A. Nolan Prehistoric Planet
"I'm happy to say my Secular Frontier blog post of my interview with Edouard looks ..."
John MacDonald The Odious Penal Substitutionary Theory of ..."
"The name of the song was mentioned in the episode here is the full version ..."
dschram Entering Strange New Worlds of Star ..."
"Thank you for sharing this. Where did you learn that about the Kenyan folk song? ..."
James F. McGrath Entering Strange New Worlds of Star ..."
Browse Our Archives
Related posts from Religion Prof: The Blog of James F. McGrath