A list has been drawn up of the 100 most frequently edited Wikipedia articles (HT Jezebel). The article about Jesus is #5 on the list: 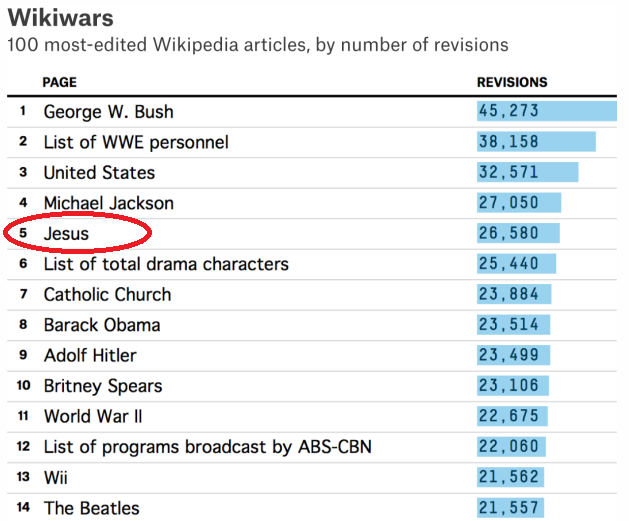 There are lots of observations that need to be made about this.

One is that Jesus continues to be edited. That process has been going on as long as there has been literature about Jesus, and so this is nothing new. Indeed, a second observation that follows quickly along after the first is that Jesus is the highest-ranking non-modern figure, which says something about the ongoing interest in him. But any figure that is highly esteemed and considered an authority inevitably becomes a battlefield as competing views seek to claim that figure for themselves.

A “battlefield” is a good way of characterizing these Wikipedia articles.

And so a third point that needs to be made is to highlight yet again the need for information literacy/fluency and critical thinking skills, and to be wary of relying on Wikipedia – and certainly of relying on Wikipedia alone – as a source of information about important subjects. These articles reflecting the battles in popular opinion. They by definition aren’t going to provide definitive answers to them, although they might seem to, depending on when you read them.

May 31, 2014 Third Council of Nicaea
Recent Comments
3 Comments | Leave a Comment
"I'm always amused by apologists who think that the Corinthians would have traveled hundreds of ..."
VinnyJH Christians and Internet Rumors
"I love this article. Social media has shown me some very disappointing sides of certain ..."
Phil Ledgerwood Christians and Internet Rumors
"I was taught that "Amen" means something different than 'you may be seated. There are ..."
Deborah Harding The “Original Aramaic Lord’s Prayer” is ..."
"These are great points. What I appreciate about the article is that we tend to ..."
James F. McGrath We All Believe
Browse Our Archives
Follow Us!