Some people approach the Bible as though there were scientific tests that can be conducted to determine the genre, the meaning, and other important details about a text in the Bible. 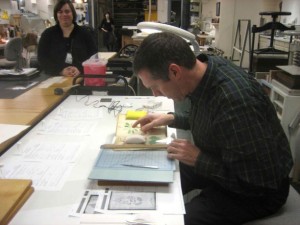 It might be kind of cool. Drop Genesis 1:6-7 into a vial of hydrochloric acid. If it dissolves, the dome is metaphorical. If not, it is literal.

Interpreters have to accept that subjectivity is part of the process. If all life in the universe ceased to exist, texts would just be paper and ink, data with no one to read it. And so attempts to remove subjectivity from the process of interpretation are an exercise in futility.

In most cases, the genre, and the meaning, are a matter about which there will be a consensus among those who study the text in question professionally – in the original language, with knowledge of the historical and cultural context. In such cases, the meaning is probably quite clear. As I have said before, scholars are required to try to find something new to say about the texts we study. If there were a new way of interpreting it that was not absurd, we would try it. Indeed, sometimes absurdity doesn’t stop us. When we agree, it is significant.

And so do not be surprised that there are disagreements. And do not think that somehow a method can be developed that will avoid them entirely.

But at least you can take comfort that everyone agrees that a story with a talking animal in it isn’t history, right?

May 15, 2014 There Will Never Be Another
Recent Comments
2 Comments | Leave a Comment
"Intriguingly enough, since you mentioned "No one has suggested that Jesus was merely a carbon ..."
Chris H #JohnTheBaptist Enoch Seminar Nangeroni Meeting Day ..."
"Bestest post,..... My daughter who is incapable of being on the internet due to genetics ..."
davidt Evil In the Youth Group
"From my perspective this comes from a really problematic tendency in neo-liberal thinking to promote ..."
Chris H Jesus Wasn’t Unique
"It definitely seems memeworthy to me!https://uploads.disquscdn.c..."
James F. McGrath Evangelicals, Objective Truth, and the MSM
Browse Our Archives
get the latest from
Religion Prof: The Blog of James F. McGrath
Sign up for our newsletter
POPULAR AT PATHEOS Progressive Christian
1