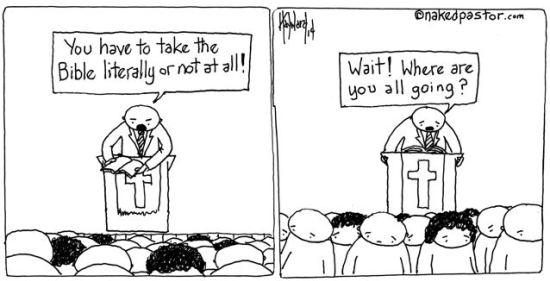 David Hayward’s cartoon above illustrates the reason why I consider Biblical literalism to be an attack on Christianity, rather than an expression of faithfulness to it. No matter how much they insist otherwise, no one actually takes the Bible literally – not even all the bits that are “clearly” non-poetic.

But that doesn’t stop preachers from telling people they have a stark choice: either accept everything the Bible says, or toss the entire thing aside along with any faith, beliefs, and values they associate with it.

If that were indeed the choice that confronts us, then there would be no alternative to walking away, other than increasingly feigning faithfulness and consistency while hiding one’s hypocrisy.

Both options are detrimental to a healthy spiritual life.

But they aren’t the only options. Christianity flourished before it had a Bible, and when the collections of texts that Christians had could not be read by most of them. And even among those who could study and interpret the texts in question, what we see them doing with those texts is anything but literalism.

It is time to make clear to the world that the situation is not one of faithful Biblical literalists and then others who are compromising “sort of” Christians. If anything, the situation is one of progressives who are seeking to continue the dynamic interplay between tradition and novelty to which the Bible and the entire history of religion (not just Christianity) bears witness, and people who deceive the gullible into first believing, and then pretending, that they are being faithful in ways that they aren’t, at least not consistently.

Despite what fundamentalist preachers will tell you.