P. Z. Myers has seen the dark side of skepticism, the fact that its tools can be applied not just to fringe bunk but to anything and everything. And so he has written in an effort to distinguish science and skepticism. Here is an excerpt from his recent post on the topic:

A short while ago, I received a very nice letter from a young woman in Indiana who liked my book. I scanned it and posted it, with her name and town redacted — it was a lovely example of a phenomenon we’ve noticed for quite some time, of the way the internet and books about atheism have opened the door for many people who had previously felt isolated. It also said kind things about The Happy Atheist, so of course I was glad to share it.

Some nut named Cavanaugh, in the name of True Atheism and Skepticism, has posted a lengthy dissection of the letter. He doesn’t believe it’s real. He thinks I wrote it myself. To prove his point, all he has is the scan I posted…so he has taken it apart at excruciating and obsessive length. He has carefully snipped out all the letters “w” in the letter, lining them up so you can easily compare them. My god, they’re not identical! He has another figure in which he has sliced out a collection of ligatures — would you believe the spacing between letters, in a handwritten letter, is not consistent? She used the word “oblivious” a couple of times…a word that I also have used many times. She wrote exactly one page, not two. He mansplains the psychology of teenaged girls to assert that there’s no way a 15-year-old woman could have written the letter. You get the idea. He is being properly skeptical, accumulating a body of “facts” to disprove the possibility that someone in Indiana actually wrote a letter…

When your whole business model is simply about rejecting fringe claims, rather than following the evidence no matter how mainstream the target, you’ll inevitably end up with a pathologically skewed audience that uses motivated reasoning to abuse the weak.

Clearly we need more than “skepticism” to get us to an accurate portrait of reality.

Of related interest, Richard Carrier has posted a list of mainstream scholars, including myself, as well as others who disagree with him, and his assessment of our deludedness and in some instances even our mental health.

Also, Hemant Mehta is one of several to have drawn attention to this music video, which illustrates how our minds play tricks on us: 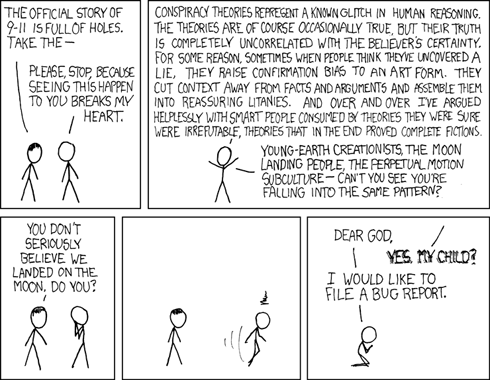 June 18, 2014 Sneaky Trick
Recent Comments
220 Comments | Leave a Comment
"I still remember a sermon when the preacher sympathised with Thomas because he is forever ..."
Scurra QAnonsense
"I have, and thanks to your comment and a group discussion on Facebook I am ..."
James F. McGrath ChristianBooks Q&A: What Jesus Learned from ..."
""Wokeness" is a vague label like "liberal" that doesn't really say or mean anything. Putting ..."
James F. McGrath The Immorality of “Pro Life”
"You are assuming that the termination of a pregnancy at any stage whatsoever is murder, ..."
James F. McGrath The Immorality of “Pro Life”
Browse Our Archives
get the latest from
Religion Prof: The Blog of James F. McGrath
Sign up for our newsletter
POPULAR AT PATHEOS Progressive Christian
1