This comment by Arcseconds seemed worth quoting on the blog. It is part of a discussion of a recent attempt by P. Z. Myers to make the infamous “religion is inherently opposed to science” claim.

I accept that you and Myers admit that religious people can be excellent scientists.

But by reifying religion and science as ‘spheres of endeavour’ and talking as if they interact with one another one their own rather than as being human activities that interact with one another only in so far as human beings act in scientific and religious ways, this allows you to pull a sneaky trick and count every time a religious person does good science as a point for science (even though in their minds this might be motivated by their religious beliefs, and not separate from th eir religious practice) , and every time a religious person resists science for exactly the same kinds of considerations, that counts as a point against religion.

This is a little unfair, don’t you think? Heads I win, tails you lose?

Plus, it’s looking awfully like an unfalsifiable hypothesis. Isn’t that supposed to be a problem for you sciencey types? Again, I repeat my request for what would count as evidence against your claim here. It doesn’t seem to me that anything could: on most scientific issues most religions say almost nothing, on science in g eneral t hese days the major forms of most religions are, if anything, somewhat enthusiastic (“you find out about God’s creation!”), there are plenty of religious scientists as you admit, but somehow none of that counts in the face of some resistance from some sects on a small number of issues.

The honest thing to say here is that sometimes religion resist science. Not that they always, and by there very nature, do so.

You could make a similar argument that religions are always anti-music. Despite the fact that religions frequently use music, that a lot of music h as been motivated by religion, there are oodles of religious composers, some of whom have held religious positions. Because music is a distinct sphere of endeavour, and whenever anyone makes music that’s doing music, no matter what their motivation, and whenever anyone resists music for religious reasons, they’re doing religion, ergo religion is always anti-music. Similarly anti-alcohol.

Your characterisation of religion as always been about being static is just false. You know as well as I do that generally speaking attempts to re-establish an original form of a religion just create a new form of the religion, so at best your point can only be about what they think they’re doing, and not what they actually do. I don’t think it can be denied that these new ‘old ‘ forms of religion frequently have all of the features of genuine innovation: imagination to think it up, the courage to make the change, creative adaptation of existing forms of practice to fit the ‘old’ requirements, new prayers, new music, new hymns, etc.

And they frequently think of themselves explicitly as innovating. You are aware that there’s a whole area called ‘theology’ that’s been around for centuries, right? If you think that all theologians think of themselves as re-establishing old truths, you really need to learn more about the area. This might explain Luther, but it does not explain Augustine, Anselm, Aquinas or Abelard, all of them thought of themselves as presenting new information about God, not just rehashing old ideas. I think you’d find most theologians think of their activity in this way. The Roman Catholic church explicitly sees theology as a progressive enterprise and reason as a route to discovering new things about God.

And of course there’s no shortage of examples of religiously-motivated attempts (and even successes) to reform society. For at least the last 200 years these have frequently been thought of as attempting to change existing society for the better, not to turn back the clock to something that existed in the halcyon days of the past. 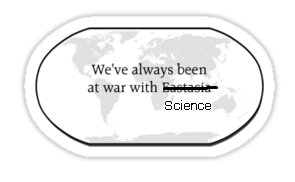 10 Things You Can't Vote For...
The God Article with Mark Sandlin
Books by This Author Books by James F. McGrath