A post on the blog Internet Monk recently explored the idea of a different sort of “creation museum,” one that accurately depicts the natural world (unlike the Creation Museum in Kentucky), and takes its inspiration more from the end of Job than the beginning of Genesis. The ending of Job depicts God as pointing to creation, not as a challenge to get the details right, much less a command to reject what others think about its age, but as an experience that should instill awe and humility. Young-earth creationists seem not to have understood that message.

I was asked to chime in on a private Facebook discussion about creation, and thought I would share what I wrote here too:

Christians agree that the Bible teaches CREATION. That is not the issue. The question is whether the Bible teaches the details of the nature of the cosmos. It doesn’t mention molecules and atoms, nor does it mention galaxies or even that stars are suns, hydrogen (also not mentioned) undergoing a fusion reaction (also not mentioned) rather than celestial beings. To insist that the Bible must provide us the age of the Earth and accurate biological information, when it doesn’t mention genes, and depicts a dome over the Earth, is to insist that the Bible is something that it is not. And so the key problem is that the people who are claiming to be the most faithful to the Bible with the loudest voices in our time – folks like young-earth creationists – are in fact the ones who are being the LEAST faithful to what the Bible actually says. They are pretending the Bible is something it shows itself clearly not to be, and in order to uphold that false claim, they then have to pretend that the Bible says things it does not, and does not say things that it does. And so personally, I think that the kind of dishonesty that is necessary to maintain young-earth creationism is inherently incompatible with being a Christian. 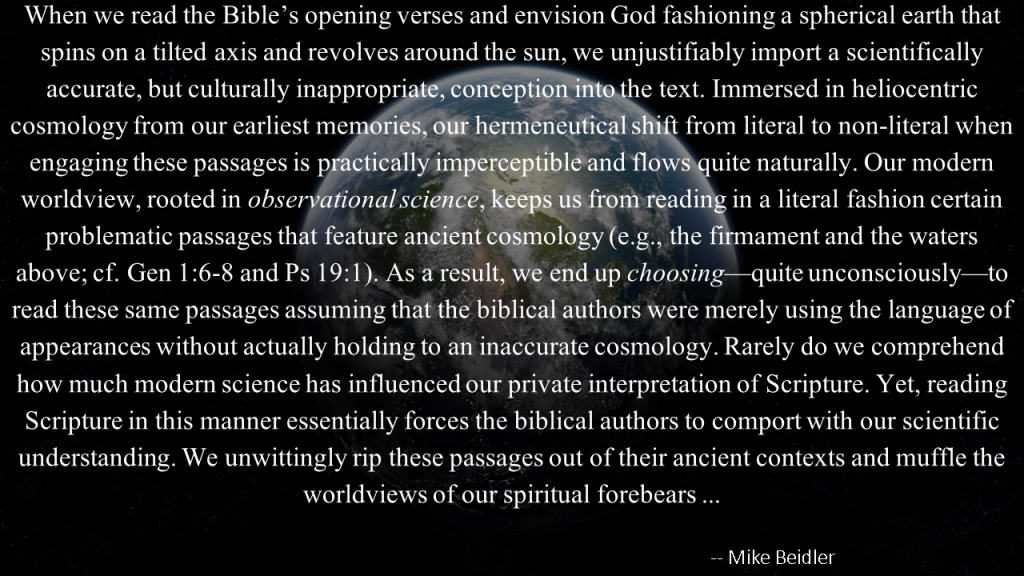 Paul Wallace has come to realize that young-earth creationism isn’t about science, it is about gay marriage.

Of related interest, Ian Paul interacts with a post of mine on what to do when the Bible is wrong, and Rob Grayson discusses the phrase “the Bible clearly says.”

September 27, 2014 Dalek Recipe
Recent Comments
9 Comments | Leave a Comment
Browse Our Archives
get the latest from
Religion Prof: The Blog of James F. McGrath
Sign up for our newsletter
POPULAR AT PATHEOS Progressive Christian
1

U.S. Supreme Court Rules for Religion Against Health
Wednesday, the U.S. Supreme Court ruled 5 to 4 in favor of...
view all Progressive Christian blogs
What Are Your Thoughts?leave a comment
Copyright 2008-2020, Patheos. All rights reserved.