Doctor Who: Planet of the Spiders

Doctor Who: Planet of the Spiders October 9, 2014 James F. McGrath

This episode is of great interest, not only because it marks the end of the Jon Pertwee era, but also because of the strong elements related to Buddhism. Not only broad themes but specific plot elements from this episode are echoed in the later Peter Davison episode with a Buddhist focus, Kinda and Snakedance.

The chanting of “om madhi padmi hum” was something the Doctor himself used and recommended in “The Abominable Snowmen.” Here it is used to commune with a being not quite as dangerous as the one the Doctor was seeking to protect himself and his companions against in that earlier episode, but still malevolent. And so there seems to be a hint that Buddhism is a pathway to connect with powerful realities, but that one must be cautious, as not every powerful entity that it is possible to commune with is benevolent.

In the episode, we also encounter a performer who reads minds. He pretends it is a trick, but the Doctor realizes that his real secret is that he genuinely is clairvoyant – and is also capable of telekenesis. The Doctor says that such powers are perfectly natural, and indeed lie dormant in everyone.

Much of the action takes place at a Buddhist retreat center. It would be interesting to take a close look at the sayings of the Buddhist master, and compare them to actual Buddhist teachings and to fake Buddha quotes. For instance, “One day you will learn to walk in solitude amidst the traffic of the world.”There definitely are some genuine Buddhist elements – such as the emphasis on there being no self. Nothing substantial is done with those elements, however. And the typical Buddhism mandala will not transport someone to Metabilis III.

Towards the end of part 2, there is a cool chase involving a car, a helicopter, and a hovercraft. When the Doctor finally catches up with the man he is pursuing in a boat, he concentrates and vanishes. Buddhist meditation doesn’t enable you to do that, either. But the episode does indicate some of the fascination with Buddhism in the English-speaking world in the 1970s.

It turns out that spiders from Earth that ended up on Metabilis III in a human spacecraft have grown in size and power, and are intent on conquering Earth.

The Doctor mentions an old hermit on Gallifrey who was his mentor, whom he had mentioned before. He says he saw him when he looked into the crystal.

“We are all apt to surrender ourselves to domination – even the strongest of us” says Kan’po, after helping Sarah Jane realize she is free. Kan’po, we later learn, was the Doctor’s teacher, “my guru, if you like.” And so not only is Buddhism depicted as a real way of connecting with powerful aliens, but your guru is liable to be a time lord rather than a human!

This is, to my knowledge, the first episode which makes explicit that the TARDIS is alive – and the Doctor says, “she’s no fool.”

A cool element in the story is when the character Tommy is affected by the blue Metabilis crystal. The words he is up to in a children’s book he previously read with difficulty are “We say our prayers.” He reads poetry after that, and grabs many more books from the shelves in the library.

The “Great One” calls for all worlds to worship and bow down before “the great and powerful me.”

The episode is laced with religious elements of a variety of sorts, and towards the end, the Doctor sacrifices himself to confront the leader of the spiders – causing him to have to regenerate.

The Jon Pertwee era was a very popular one in the history of Doctor Who. His portrayal would be difficult to top. And so that makes it all the more impressive that Tom Baker managed to become the most iconic Doctor of all in the classic era of the series, bringing back elements of the comical that were typical of Patrick Troughton’s portrayal of the Doctor. Jon Pertwee was a tough act to follow. 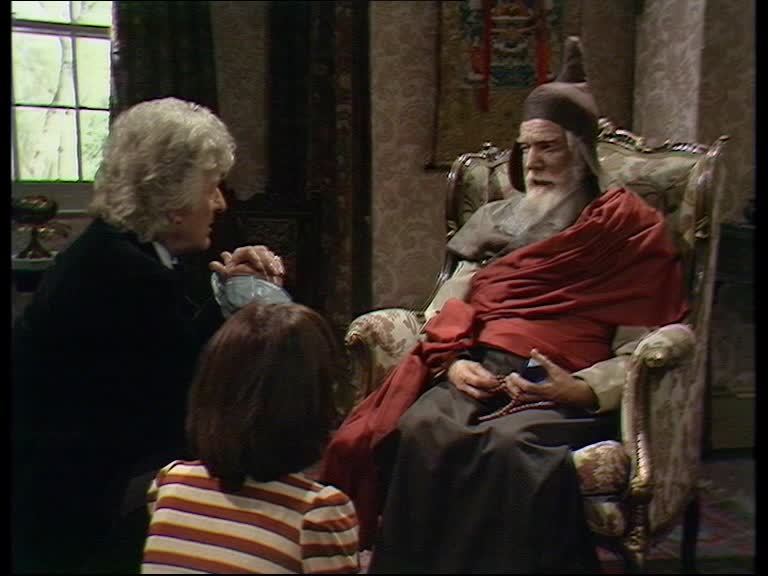 October 10, 2014 Extraterrestrials and Human Religions
Recent Comments
1 Comment | Leave a Comment
Browse Our Archives
get the latest from
Religion Prof: The Blog of James F. McGrath
Sign up for our newsletter
POPULAR AT PATHEOS Progressive Christian
1