I am grateful to Joel Watts for pointing out the original Italian text of something that the Pope recently said, which had puzzled me in the English translations I had encountered:

Here is a translation:

God is not a demiurge or magician, but the Creator who gives existence to all entities. The beginning of the world is not the work of chaos which owes its origin to another, but rather it derives directly from a supreme Principle which creates out of love. The Big Bang, which today is posited as the origin of the world, does not contradict the creative divine intervention, but rather requires it.

And so the Pope is clearly thinking of the God depicted by various anti-science creationists, including the Intelligent Design folks as well as young-earth creationists. That God is either a tinkerer who works rather like a human engineer with evidence of trial, error, and shortcomings, or a malevolent deceiver who makes the world look as though it were something it isn’t.

Of course, it should also be pointed out that evolution acts in many ways rather like the deity these creationists posit, or like a Gnostic Demiurge, inasmuch as it tinkers with that which already exists, at a distance from the supreme origin of the cosmos. And Genesis does depict creation out of chaos.

Be that as it may, Pope Francis, in re-articulating the longstanding stance not just of the Catholic church but of most Christians, is leading the way in the only viable direction for contemporary Christianity: to embrace science and make it part of our worldview, rather than fighting in vain to deny it in a manner that misrepresents both the scientific and religious data. 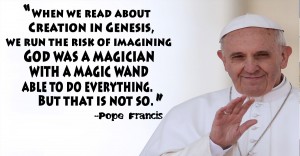 November 3, 2014
Mythicism and the Teacher of Righteousness
Next Post

November 4, 2014 LOST Rewatch: Numbers
Recent Comments
52 Comments | Leave a Comment
"hey mr dr lost fan. one of your video is not available anymore, either remove ..."
irshad Is Google Smarter Than Your Pet?
"see? some church padres forgot this like the one who said to donate to his ..."
irshad A Reminder: Jesus Didn’t Say “Bully ..."
"so checked eutychus blog and obviously this patheos.com but all i got is that original ..."
irshad Fork Criticism: Understanding Biblical Criticism Through ..."
"considering james f. mcgrath wrote some fiction stories how is he gonna judge all the ..."
irshad The Root of All Evil?
Browse Our Archives
get the latest updates from
Religion Prof: The Blog of James F. McGrath
and the Patheos
Progressive Christian
Channel
POPULAR AT PATHEOS Progressive Christian
1