This is the episode that introduced the famous numbers. Hurley sees the numbers on a paper that Sayid took from Danielle Rousseau. In a flashback, we learn that he won the lottery with those numbers. Hurley talks about the possibikity that the money is cursed, and his mom hits him saying, “That’s blasphemy – we’re Catholic, we don’t believe in curses.” She makes the sign of the cross more than once. 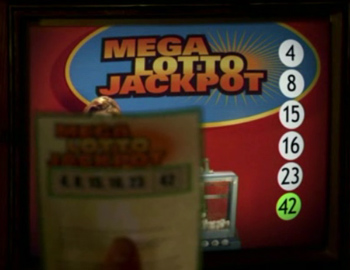 This episode is especially comical, even as it explores the bad luck that follows Hurley around. There is also a reference to Hurley owning the majority of shares in a box company, which connects him (one presumes) with John Locke.

Hurley thinks the numbers are cursed. He goes to a psychiatric hospital to see a man named Leonard Simms. He keeps repeating the numbers. He got them frim a guy named Sam Toomey who heard them in Australia. Hurley finds Sam’s wife, and learns that 16 years earlier, Sam heard the numbers over the radio when in the Navy. He used them to win a carnival game, and then the bad luck started. Sam killed himself because he thought that bad things that happened were due to his use of the numbers. Sam’s wife says that you make your own luck – you shouldn’t blame the numbers.

Hurley goes looking for Danielle, and Jack, Sayid, and Charlie follow him. When Hurley finds Danielle, he learns from her that there is a radio tower on the island, which was broadcasting those numbers. The numbers led her team to the island. She later changed the transmission to her distress call. When Danielle agrees that the numbers are cursed, Hurley is incredibly relieved that someone finally agrees with him.

Hurley manages to get them the battery they wanted. He suggests that he might have caused the plane crash. Charlie says it is ridiculous for Hurley to think he was to blame – they all have baggage.

The phenomenon of number stations broadcasting on radio has been the focus of much speculation, and clearly J. J. Abrams has a significant interest in the subject, since it appears in Fringe as well. I thought that the latter show did a better job of providing not only mysteries but answers. In the end, many felt that LOST didn’t even answer the question of the meaning of the numbers on television, but only in videos and websites that were created to accompany it, which still didn’t seem to do justice to their apparently mystical power on LOST.

However, the numbers resurface later, connected with the various candidates to be Jacob’s replacement. And that suggests that perhaps the Dharma explanation of the numbers, in terms of the Valenzetti Equation, is not the ultimate explanation – or perhaps they misperceived what the determining factors were in the world’s survival. It wasn’t plagues and wars, but people – the candidates.

What do you think about the numbers on LOST? A symbol, whether for the candidates or for something or someone else? A plot element with an unconvincing explanation? Or is there some better way to understand them?

November 4, 2014 Called to Ministry
Recent Comments
0 | Leave a Comment
Browse Our Archives
get the latest from
Religion Prof: The Blog of James F. McGrath
Sign up for our newsletter
POPULAR AT PATHEOS Progressive Christian
1 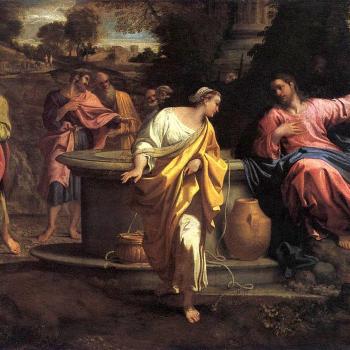