As the party heads north looking for Jack, they find a cow with a bell around its neck, and then a building with a satellite dish on top and other animals around it, and the man with the eye patch they had seen on the screen in the Pearl station. Danielle has never been there before. She has no interest in the man, and waits for as may of them survive. Sayid is shot in the arm as he approaches the house, but Kate and Locke disarm him. The man says he is Mikhail Bakhunin, and that he is the last surviving member of the Dharma Initiative. They bring Sayid inside and treat his wound. Mikhail says that after the cold war, he left the Russian military and replied to a newspaper advertisement, asking, “Do you want to save the world?” He describes the Initiative as very smart and very rich. He says the ourpose of the Flame station is to communicate with the outside world. He says the Dharma Initiative foolishly initiated a purge to kill the “hostiles,” and he says that afterwards they made a peace. Mikhail says the hostiles were there for a very long time before the Dharma Initiative was. His cat is named Nadia after Nadia Comaneci, the greatest athlete the world has ever known. He says the satellite has not worked in years.

Sayid is sure Mikhail is not Dharma but “one of them,” and that he is not alone. They fight, and tie up Mikhail. Exploring the station, they find it is wired with explosives. They also find Dharma Initiative manuals, such as for food drops and operations.

When Locke beats the computer at chess, he gets a recording with Pierre Chang, with a menu of options, Satellite and sonar communications are inoperable. He says, if there is an incursion by hostiles, enter 77. They find Bea Klugh, while Mikhail captures Locke. Klugh talks to Mikhail in Russian and gets him to shoot her. They apprehend Mikhail, and he says that he was never Dharma, but the rest of what he said was true. Sayid shows that he found a map showing power cables running to a place called the barracks.

In a flashback, we see Sayid working as a chef under the name Najif. A fellow Iraqi spnamed Sami compliments his cooking, asks him to come work for him. But when he goes there, Sami’s wife identifies him and they knock him out and lock him up. Sami accuses Sayid of having tortured his wife while he was part of the Republican Guard. Sayid insist he did not torture her. She tells a story about a cat she rescued from children who tortured it, which sometimes scratches or bites her, because it forgets and never feels safe, she forgives it, because she knows how that feels. Sayid confesses, saying her face has haunted her ever since, and he is so sorry for what he did. He weeps. She says she forgives him. When he asks why she is letting him go, she says that we are capable of doing what those children did to the cat, but she never wants to become that.

Locke enters 77 before they leave the station. The station explodes.

The flashback storyline offers a powerful message about forgiveness, about the breaking of cycles of violence and retribution, but also of forgiving those who harm us because we understand that, in many instances, far from being evil, their action towards us is the result of trauma experienced in the past and the inability to live as though in safety. Perhaps we are also meant to ask whether the Others react with distrust and hostility towards outsiders because of their own experience of people who came to the island. 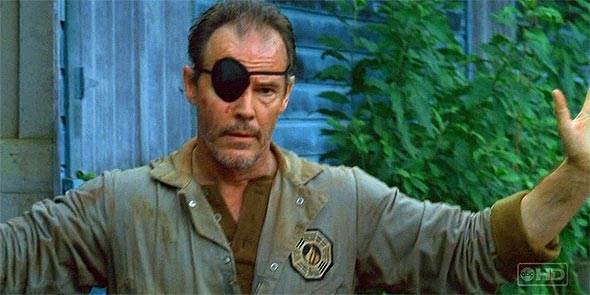 February 1, 2015 Best Thing Since Sliced Scripture
Recent Comments
0 | Leave a Comment
Browse Our Archives
get the latest from
Religion Prof: The Blog of James F. McGrath
Sign up for our newsletter
POPULAR AT PATHEOS Progressive Christian
1

A Straight Christian Mom's Response to...
FreedHearts
Books by This Author Books by James F. McGrath