The finale to season 2 picks up where the previous episode left off, with excitement as a boat is seen off shore. Jack, Sayid, and Sawyer swim out to it. It turns out to be Desmond. He has been drinking heavily. He says he sailed due west the whole time and should have been in Fiji. He says it is a snowglobe – the island and the ocean around it. He asks if they are still pushing it, and Jack says yeah.

In a flashback, we see Desmond released from prison, dishonorably discharged from the military. Charles Widmore meets him outside and tells him to get in the car. He reveals that his daughter Penny never received any of his letters. Widmore then offers him money to not contact Penny and disappear.

Sayid sees the arrival of the boat as fate. He tells Jack that he go around the island and get to the Others before Michael’s party does, scout them, and then set a signal fire to meet up with them.

Locke tries to persuade Eko to not push the button. He tells Locke not to tell him what to do. Locke tries to smash the computer, and says, “We’re only puppets, puppets on string…As long as we push it, we’ll never be free.”

When Sayid says he is going to the north shore of the island, Desmond asks, “Off to see the hostiles?”

In a flashback, Libby buys a coffee for Desmond. He tells her that he is going on a sailing race around the world. She tells him that she has a boat, which was her husband’s, who got sick and passed away a month earlier. She gives it to Desmond.

We see Desmond just before he bumps into Jack when running. Penny comes to him, saying “I have a lot of money – with enough money and determination you can find anyone.” She asks him what he is running from, and Desmond says he has to get his honor back, and that’s what he’s running to.

Desmond tells Claire that the vaccine is a waste of time. Locke tells Desmond about the Pearl station and the film from there.

We see the foot of the statue for the first time. Sayid says he does not know which is more disquieting – that the rest of the status is missing, or that it only has four toes.

Locke and Desmond trick Eko into leaving and then they trigger a lockdown.

In a flashback, Desmond is in the race around the world. His boat is in a severe storm. He gets knocked out, and washes up on the island, where a man in a hazmat suit finds him. It is Kelvin Inman. He asks Desmond, “Are you him? What did one snowman say to the other?” They are the same questions that Desmond would ask Locke. Desmond learns that Radzinsky made edits to the orientation film. Inman tells him he wears the suit so that he does not get infected out there.

After they spot a couple of Others following them, and shoot one, Jack gets Michael to confess. Sayid prays on the boat, starting with “Allahu akbar.” Sayid finds the place where Michael had been taken by the Others. The Dharma Initiative doors are fake, with a rock wall behind them. The place is abandoned. Kate and the others find the journals that had been sent into the hydraulic tube from the Pearl station. We hear whispers, and then the Others catch them with tazers.

In a flashback, we see Kelvin and Desmond trigger a lockdown. Kelvin makes paint and makes a map, continuing Radzinsky’s work, saying it was his idea, Radzinsky had a photographic memory. But he killed himself. We learn as well about the failsafe underneath the Swan station – “turn the key and this all goes away.” He says that there was a leak, and so they discharge the electromagnetism at periodic intervals. He asks Desmond if he has the courage to take his finger out of the dam and blow the whole thing up instead. We see Desmond realize that Inman’s hazmat suit has a tear in it, and so Desmond follows him outside, where he takes the suit off. Inman was trying to fix Desmond’s boat. Desmond kills him by accident, and so he takes the key for the failsafe and runs back to the hatch. The hieroglyphs are displaying, the whole place is shaking, and an announcement says “System Failure.” But he manages to enter the numbers, and things return to normal. We later see him thinking about killing himself, and so he takes Dickens’ Our Mutual Friend, planning to finally read it, and he finds a letter from Penny that he was supposed to find when he was in prison. He weeps, and throws things, but hears banging on the hatch door and shouting, and turns on a light – which Locke sees.

Eko gets Charlie to help him try to open the blast door with dynamite. When Charlie suggests that it might be a joke, Eko takes off his belt and throws it, and it swerves and sticks to the place that is covered in concrete. The blast doesn’t get through.

Desmond and John talk about destiny. John says a kid died because of him, referring to Boone. He talks about the light that came on which he thought was a sign. Desmond suggests thst maybe the experiment was in the people in the Pearl station rather than the Swan station. Desmond realizes that the day when the station had the system failure, that had crashed Oceanic 815. Locke refuses to believe, and smashes the computer. Desmond takes the failsafe key. He tells Locke that he saved his life. Desmond tells Locke that he is sorry for whatever made him stop believing, but it is all real. He adds, “see you in another life brother.” Metal objects begin to fly from their places. Desmond makes the sign of the cross, then turns the key. The sky illuminates all around the island, and the hatch door falls out of the sky at the beach.

Ben isn’t happy about the arrangement, but says that they got more than they bargained for when Walt joined them. Michael asks, “Who are you people?” Ben responds, “We’re the good guys, Michael.” Bea Klugh lets Hugo go, saying his job is to tell his friends they can never come there.

The episode ends with an Antarctic station detecting an electromagnetic anomaly. They call Penny Widmore and say, “We think we found it.”

When I first watched this episode, I was so focused on the mysteries that I failed to simply appreciate the stories. The focus was not on the coincidences of people’s lives intersecting. It was on the people themselves, on their stories, on love.

Perhaps the most important element in the episode, as far as the mysteries were concerned, was the revelation, more clearly than ever before, that all the information we had been fed was a series of lies obscured by more lies. Had Radzinsky been honest with Inman? Had Inman relayed the information correctly? We know he was not completely honest with Desmond. It is like the game of telephone. And everyone was making it all up as they went along to some extent. And so perhaps the most significant statement in the episode is Locke saying “I was wrong.” And perhaps the most poignant way it makes its point is by getting us to focus on mysteries and become eager to find answers, only to force us to see that we too neglect people and their lives and stories in favor of a quest for answers that is not necessarily more meaningful or worthwhile, to say nothing of whether it is likely to be successful. 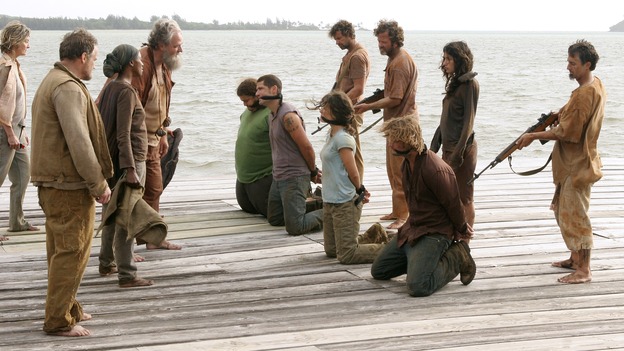 January 9, 2015 Double Standard on Religious Violence
Recent Comments
1 Comment | Leave a Comment
"Yes 'John' has some kinda problem with the ioudaioi, i.e. the Judeans,,that's the point, meanwhile ..."
Mark S “To Your Tents, O Israel!” A ..."
"Haha I see, the Junia-Joanna material fits very well with our Benjaminite's sojourn in 'Arabia'!The ..."
Mark S “To Your Tents, O Israel!” A ..."
"Remind me what is wrong with whataboutism when the topic is antisemitic mental illness? Israel ..."
Mark S Understanding Whiteness
"Yes, of the tribes other than Judah, Benjamin is the one that is likely to ..."
James F. McGrath “To Your Tents, O Israel!” A ..."
Browse Our Archives
get the latest from
Religion Prof: The Blog of James F. McGrath
Sign up for our newsletter
POPULAR AT PATHEOS Progressive Christian
1