Desmond sees a flash which involves not just Charlie’s death, but also someone coming to the island. He thinks it will be Penny, and so this time he wants the future that he has glimpsed to come about. Desmond takes Charlie, Hurley, and Jin “camping.” Then they hear a helicopter, and see someone “eject” from it. They go into the jungle and find a bag with a satellite phone in it and the novel Catch-22 In Portugese in it, with the same photo if him and Penny in it that he has. When the moment comes that he saw Charlie killed, however, Desmond cannot do nothing and so he saves him.

Then in a flashback we see Desmond in a monastery, praying. He had taken a vow of silence, and now is welcomed into the order as a novice with the words, “Welcome, brother.” Then we later see him working on labeling wine bottles. It is called Moriah Vineyards, and he talks with a monk about the name, the testing of Abraham, and sacrifice. We learn that Desmond had left a woman named Ruth a week before the wedding. He says he had a calling, and she said that they dated for six years and the closest he had had to a religious experience was when Celtic won the cup. Desmond tells how this sense of calling came to him. Ruth says the next time he wants to break up with a girl, he should not join a monastery, but just tell her he is too scared. Desmond returns to the monastery and drinks some of the wine, which is very expensive. The monk says he doesn’t think Desmond is cut out to be a monk, and he says that God has bigger plans for Desmond than being a monk. He just has spent too much time running away to realize what he is running towards. When he asks what he is supposed to do now, the monk says, “Whatever comes next.” When Desmond is leaving, the monk in charge asks him to wait to help with some heavy listing. And that is how he meets Penny. She asks him to help her unload the wine in Carlisle.

On the island, Desmond talks about the flashes as a test, like God tested Abraham. When they find the pilot, hanging from a tree and not moving, Desmond says he is sorry. But the pilot is alive – and turns out not to be Penny.

The episode features religious themes, ranging from the use of religion as an excuse to avoid doing things that frighten us, to actual notions of destiny and fate and determinism and free will. 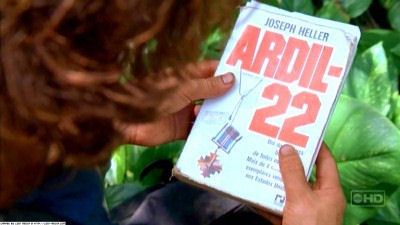 February 6, 2015 Banning God from Schools and T-Shirts
Recent Comments
0 | Leave a Comment
Browse Our Archives
get the latest from
Religion Prof: The Blog of James F. McGrath
Sign up for our newsletter
POPULAR AT PATHEOS Progressive Christian
1 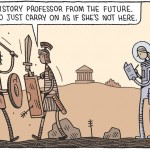