LOST Rewatch: Happily Ever After

The episode begins with Zoe talking to Desmond, who had been drugged. Charles Widmore tells Desmond that he had been shot by Benjamin Linus, and now has been brought back to the island. Desmond attacks him, but Widmore’s men restrain him. Widmore orders that Desmond be brought to the generator room for a test, and Jin brought along to watch. As they try to get the equipment working, one of their crew is still inside checking things and is killed by the radiation. Desmond is taken inside. Widmore says that he will ask him to make a sacrifice, for the sake of all the people they both love. Widmore explains to Jin that Desmond is the only person he knows who has survived a catastrophic electromagnetic event, and he needs to know that he can do it again.

Suddenly, Desmond is in the other reality, and Hurley tells him that their bags are on carousel 4. George Minkowski is the driver waiting with a car to pick him up. Desmond is Mr. Widmore’s right-hand man, calling him by first name, and hugging one another. Charles says that his son is a musician, and is planning a concert with Driveshaft. Charles gives him the good scotch, saying nothing is too good for him, also commenting on how blessed Desmond is to be free of attachments. Desmond meets Charlie Pace as he is released from jail. Charlie asks Desmond if he has ever been in love. Charlie says that he saw and felt it as he nearly died on the flight. He says he has seen something real, the truth. Desmond gives him the choice to stay in the bar or come with him, with differing consequences. He says it does not seem like much of a choice, but Desmond says there is always a choice. On their way, Charlie grabs the wheel, sending the, amd their car into the water. As Desmond rescues him, he has a flash of the “Not Penny’s Boat” moment. At the hospital, Desmond is sent for an MRI, and asked once again if he has any metal. In the MRI, Desmond sees Penny and the family they have together. He looks for Charlie and meets Jack, then chases Charlie as he runs for it. Desmond goes to see Mrs. Widmore, Eloise. She says that he should stop looking for whatever it is he is seeking, since he has the perfect life, including the thing he always wanted: her husband’s approval. Then Daniel Widmore cimes to talk to him. Dan asks him if he believes in love at first sight. He talks about seeing a woman with blue eyes and red hair in a museum. Afterwards he wrote things which made no sense to him, but which a friend at CAL Tech said are extremely advanced quantum physics. Dan asks what if this is not supposed to be their life, but they changed things, also saying he thinks he already set off a nuclear bomb. Dan tells Desmond that Penny is is half sister, and tells him where and when to find her. He goes to the stadium where in reality he first met Jack. He introduces himself, and when her hand touches his, he wakes up back in our world, fine. He was unconscious only a few seconds. Desmond says he is ready to do whatever the important task is that Widmore brought him there to do. Sayid then comes for him. He wakes up in the afterlife again where Penny says he fainted after they shook hands. He invites her for coffee. Then he asks George to get him a manifest of Oceanic flight 815, saying he wants to show them something.

The episode brings to the fore the idea – prominent on LOST – that science and faith are two perspectives on the same reality, each of which gets into trouble without the other. In this case, electromagnetism can be a door to the afterlife! 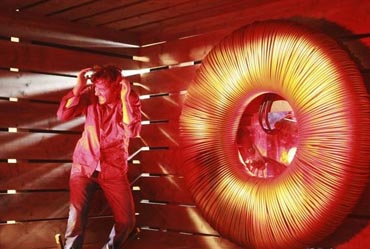