Jesus: Out Of This World 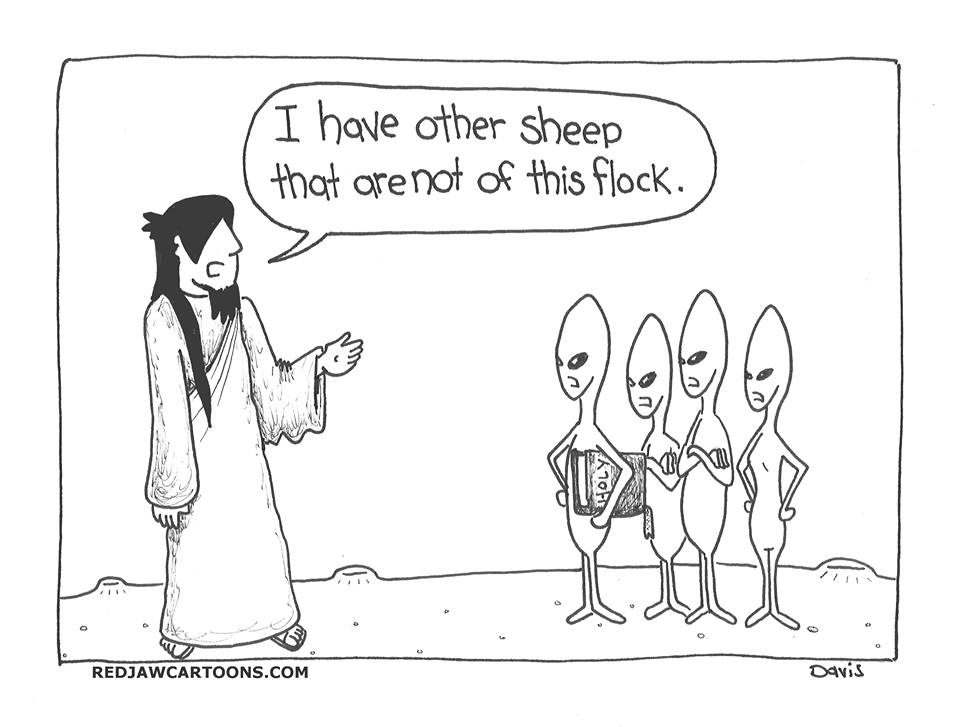 This cartoon by Spike Davis seems perfect for Ascension Day. It raises lots of interesting questions, related to topics such as inclusiveness and revelation, and not only about the meaning of the story in Acts depicting Jesus ascending into the sky, headed in the direction of what we today think of not as “heaven” but as “outer space.”

In the past, to mark the occasion of Ascension Day, I’ve made connections between the ascension of Jesus and Iron Man, shared a cartoon about ascension deficit disorder, and offered quotes together with the iconic image of spaceman Jesus. I hope you will click through and read them. In that last post, I wrote:

Ascension day is a perfect day to draw attention to the fact that literalism is not only problematic, but impossible. Even if someone insists on maintaining the literal truth of the claim in Acts that Jesus literally went up into heaven, they cannot maintain the worldview of the first century Christians which provided the context for the affirmation. They knew nothing of light-years, distant galaxies or interstellar space without oxygen. And it is not possible, through some act of either will or faith, to forget absolutely everything that has been learned since then and believe as they did. Even those who willingly choose to disbelieve modern science are making a choice that the first Christians did not have, and thus accept dogmatically what early Christians naively assumed because they knew no better.

This year, I had my attention drawn to the close proximity of the Christian feast of the Ascension, and the Islamic celebration of the ascension of Muhammad. Perhaps the most interesting thing to ask on this occasion is, if you accept that one of those is factual but not the other, why?

Of related interest, Progressive Redneck Preacher asked where Jesus went when he ascended, while Roger Wolsey proposes some changes to the Lord’s Prayer.

And finally, from Sarah’s Scribbles, here’s another cartoon featuring aliens:

May 15, 2015 Proceed With Extreme Caution
Recent Comments
3 Comments | Leave a Comment
"That's a great question to bring into this discussion! It is really hard for us ..."
James F. McGrath “To Your Tents, O Israel!” A ..."
"Must be why the Republican party is purging anyone who won't fell@te trump."
Bones Understanding Whiteness
"this sounds really cool."
Brandon Roberts Brandon Hawk, Apocrypha for Beginners
"I have told you what CRT is twice.Twice poisoned:As Candace Owens notes, CRT is a ..."
Bob Shiloh Understanding Whiteness
Browse Our Archives
get the latest from
Religion Prof: The Blog of James F. McGrath
Sign up for our newsletter
POPULAR AT PATHEOS Progressive Christian
1