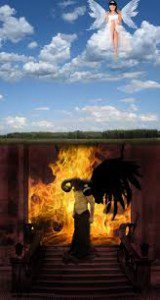 Let’s face it, the world has changed. That is, our understanding of it has changed – and how we perceive things – is reality for humans. For the first few centuries of Christianity, people believed in a cosmology that had a 3-tiered universe; i.e., one where Heaven was (literally) above us. Earth is where we dwell now. And below us, for unfortunate souls, a (literal) Hell.

That view no longer makes sense to most people in the 21st century. We know that pretty much every point in the universe can claim to be “the center” of the universe. And we know that there isn’t any literal heaven “above” the earth – as we know the earth isn’t flat, but round, and that every point on the earth can claim to be “the center” of the earth. Every point that is “above” every point on the earth is equally “above” us — and what’s up there are various layers of atmosphere and stratopshere until we reach the ethers of space — which we’ve traveled through and have sent probes beyond. 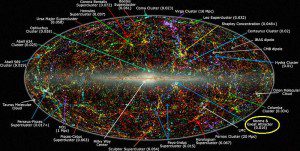 Similarly, while the earth does have a hot inner core, there’s no reason to think that it is the “hell” of ancient lore. Besides, would the soul of someone who died on the moon or on Mars, go to the center of the earth after they die? How about if they died in one of the other galaxies near us? Absurd. 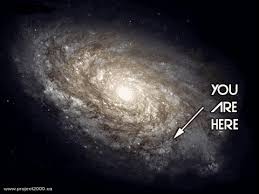 (<– no, that isn’t our Sun in the middle, that’s simply the inner core of the Milky Way galaxy, our solar system is at the arrow point : )

In all aspects of human culture, various fields, arts, and disciplines adapt, change, and evolve based upon new information and influences. K-Pop came about due to the influence of Western pop music, which evolved from hip-hop and rock music, which sprung from a blending of gospel music, jazz, and blues music — which all came about via the exposure of Appalachian folk music’s encounter with negro spirituals — and prior African folk songs — each of which were likewise influenced by other, even earlier musical forms. If one listens to a song pumping in through the p.a. system of their local grocery store today, they’re likely to hear a song that has obvious samplings from previous songs, that may well involve blending of musical styles (a mash-up). We don’t think twice about this. In fact, we dig it. Only the most obtuse, stick-in-the-mud, musical purist would complain about this (though I must say, I do kind of wince when I hear certain instrumental, easy-listening, Muzak renditions of songs by Nirvana. And no, I’m not saying that K-Pop is the zenith of music).

Back to Christianity. There are currently over 20,000 different Christian denominations and none of them are exactly the same as the way the early Christians practiced their faith – nope, none of them. Indeed, each of those denominations wouldn’t even exist today if they hadn’t adapted and evolved along with the changing times.

Christianity of most every stripe is waning in the Western nations. This is largely due to many people mistakenly thinking that conservative evangelicalism or fundamentalism are the only forms of Christianity out there (many have never heard of progressive Christianity) — and they are rejecting the supernatural theism and substitutionary theories of the atonement that go with them — that is, they reject the notion of a magical, specifically male, god who lives in the sky who we should fear and who punishes us to hell if we don’t believe that Jesus’ death on the cross is what saves people’s souls.

With all of this in mind, it seems to me that the single most important thing that could help Christianity to become more relevant and viable to today’s people who are increasingly wary of it and off-put by it — would be to adapt the Lord’s Prayer. It’s already the case that there is no one “correct” version of it. Some of us say, “and forgive us our trespasses” — others say “debts”, and others say “sins.” Some add “and ever” after most of us say forever. Moreover, none of the liturgical versions of the Lord’s prayer are exactly the same wording as the (varying) wordings that Jesus taught his disciples to pray according to the various gospels. And, it should go without saying, that Jesus didn’t speak in King James English and that he never uttered a “which art”, “thy,” or “thou.” We’ve been changing the tune, and the wording of it, since the get-go.

Specifically, I would like to suggest that congregations adapt the Lord’s prayer such that it adds a few, specific, words.

Our Father and Mother who dwells in Heaven and Earth, hallowed be Your name. Your kingdom come, Your will be done, on Earth as it is in Heaven. Give us this day our daily bread, and forgive us our treaspasses as we forgive those who trespass against us. Help us to avoid temptation and deliver us from evil, for Yours is the kingdom, and the power, and the glory forever. Amen.

Some might wish to change kingdom (seems antiquated) to “kin-dom” or “beloved community.” I tend to favor going with the literal translation of the Greek baselia – “empire” – as it helps point out the subversive nature of following Jesus that goes against the claims to power of worldly empires.

But the two primary changes that I’m suggesting are the inclusion of “and Mother” (which many congregations are already doing) and “and Earth.” Those two changes alone would help billions of people realize that our faith is seeking to remain viable and relevant. Over half of the people on the planet are female and any Christian leader today jolly well better acknowledge that. If there’s an Abba, there’s an Amma. Long gone are the days when one could say “but male words such as he and his are ‘gender neutral in English’ and therefore women (and men) shouldn’t have a problem with seeing the Divine only referred to with male terminology.”

“May those who have ears to hear, hear; and eyes to see, see.”

p.s.  This isn’t a call for “changing scripture,” but rather, simply to modify the prayer that we recite in worship -which is already a change from what is in scripture.

Even this version of the Lord’s Prayer in ENGLISH isn’t “the original” : )

and forgyf us ure gyltas,

and ne gelæd þu us on costnunge,
ac alys us of yfele. 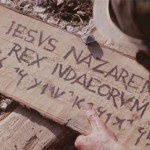 June 28, 2015 Why they killed Jesus.
Recent Comments
0 | Leave a Comment
Browse Our Archives
Related posts from The Holy Kiss