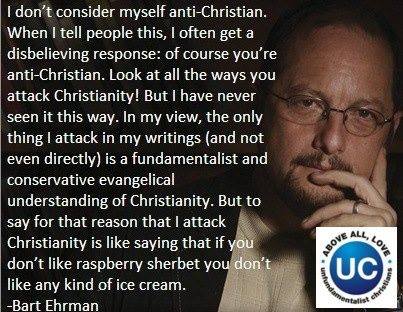 It is one of the major problems with fundamentalism that it recognizes no other form of its religious tradition as authentic than its own narrow version. And so it perceives as an attack on religion what is in fact an attack on narrowness, on unjustified dogmatism, on sloppy thinking, and many other things that deserve to be criticized not out of dislike for religion in general or Christianity in particular, but first and foremost by those who love Christianity and want to see it flourish rather than be stifled by the oppressive forces of fundamentalism. It is fundamentalism which is an attack on religion. Criticism of fundamentalism, on the other hand, is the best support to religion that anyone can offer.

See further Ehrman’s recent blog post reflecting on the recent Pew survey, in which he wrote:

Some of my former friends among the evangelicals get upset with me for “leading people astray.”   It’s people like me – or those damn neo-atheists – who are at fault for these shifts from Christianity to “unaffiliated.”   I don’t see it that way.  In my view, no one has been led astray.  People instead have been encouraged and persuaded to think for themselves, based on knowledge that is widely available to anyone willing to look, see, and think.  (Knowledge of science; knowledge of world religions, each with distinctive views; knowledge of the Bible or the history of early Christianity; and so on).

I on the other hand don’t feel that way.  My view is that everyone should be what they, on the basis of hard thought and consideration of all the information, should decide what they really think or believe.  They should not think or believe what they were told by someone — their parents, their teachers, their pastors or priests or rabbis, their Sunday school teachers, their school teachers, their friends, their lovers, or anyone else.  They should think through everything carefully themselves, and make an informed decision.

June 2, 2015 John the Jew (2016 Enoch Seminar Conference)
Recent Comments
11 Comments | Leave a Comment
"“Often wrong, never in doubt.”I’ve seen this printed on tees, needle pointed on pillows, and ..."
Tony Wilson White Supremacy, Christianity, and the Capitol ..."
"You Da man! Did exactly what u said and it took care of the problem. ..."
Jose Beiro Solving the Annoying Flashing Input Menu ..."
"It's what I tend to call a classic Irregular Verb:I am a true patriot.You are ..."
Scurra White Supremacy, Christianity, and the Capitol ..."
"Intriguingly enough, since you mentioned "No one has suggested that Jesus was merely a carbon ..."
Chris H #JohnTheBaptist Enoch Seminar Nangeroni Meeting Day ..."
Browse Our Archives
get the latest from
Religion Prof: The Blog of James F. McGrath
Sign up for our newsletter
POPULAR AT PATHEOS Progressive Christian
1