Question Jesus (He’d Want You To) 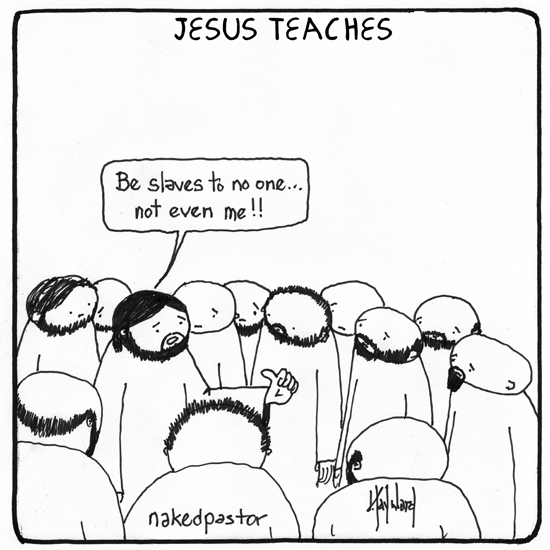 Two posts converged recently in my reader – one from David Hayward with the above cartoon, the other from Neil Carter about the last time he went to Sunday school, and the impact that the discussion of the Israelite extermination of the Canaanites had on him. In the latter post, Carter writes:

Religious dogma can put you in the most uncomfortable positions of cognitive dissonance. Not too long ago I read a comment from a woman attempting to reconcile a high view of inspiration with an acknowledgement of the obvious brutality of this story. She began by saying that God can kill anybody he wants because, you know, that’s one of the perks of being in charge of all things. He makes the rules. But then two sentences later she turned around and suggested that those were “different times” and that it is hard for people today to conceive of how violent and brutish life was back then. In other words, don’t blame God for their brutality; that’s just how ancient tribes rolled. As we say in the Deep South, “Bless her heart.” She can’t seem to make up her mind about who exactly is to blame for this atrocity. If you credit the Hebrews for this action, you’ve just admitted the Bible incorrectly attributed the decision to Yahweh. But if you credit God, you are stuck trying to justify the actions of a divine monster…

I remember one night at bedtime my kindergartner asked for a story from her Story Bible, so I opened it at the bookmark to find that the next story was the conquest of Canaan (those of you who keep up with my situation know that my family did not follow me out of their faith). This Bible tells its stories at an elementary level using cute cartoons, so I figured I could handle it alright. With clenched teeth, I read her the story as her older sister listened in from her bed nearby. As the story concluded, my little girl asked why God was being so mean to those people. Her sharp little mind instantly knew this situation was all kinds of wrong.

It is interesting to reflect on whether the historical Jesus would have agreed with the sentiment in the cartoon. Gospel of Thomas 13 attributes to Jesus the saying, “I am not your teacher/master, for you have drunk, and have become drunk from the bubbling spring which I have caused to gush forth.” Such sayings are popular among progressive Christians as well as within Gnostic Christianity – but do they go back to Jesus? 1 John 2:27 has a strikingly similar sentiment. The Synoptic sayings about certain people being “not far from the kingdom,” and coming from the East and West to enter it, could also be taken to imply that some people make their own way there without any direct assistance from Jesus. Matthew 23:8 may represent a different viewpoint – but is it one that goes back to the historical Jesus, or one that seeks to domesticate the teaching of the historical Jesus?

Returning to Carter’s post, a child is able to see problems in stories that adults have trained themselves to ignore. And so is Jesus’ teaching about becoming like little children relevant to this topic? Some dishonestly try to invert “childlike faith” into one that always accepts things on authority. But children, on the contrary, always ask “why?” and are ready to dig deeper than most adults have the patience or the answers to tolerate.

Jesus seems to have been open to challenging someone as authoritative as Moses, and the text that he supposedly wrote at God’s behest. But was that because he thought that no one and nothing except God alone is beyond question? Or was that because he thought so highly of himself that he felt free to challenge all others? Some might instinctively opt for the second option, but the first seems more compatible with Jesus’ teaching about things like humility.

What do readers think? Do you have the impression that the historical Jesus wanted people to think for themselves, even if it meant disagreeing with him? Why or why not? And if he had lived, and been a teacher, in our time and cultural context, would he have taught differently? 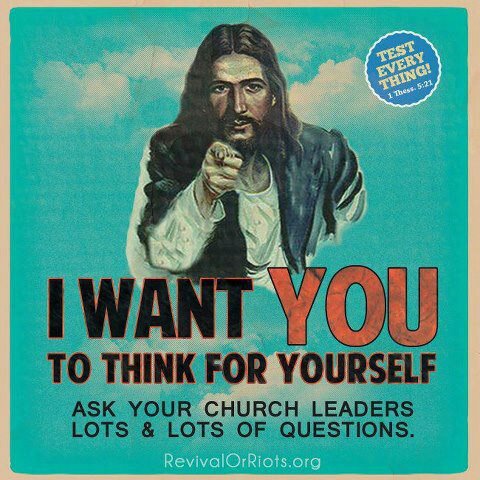