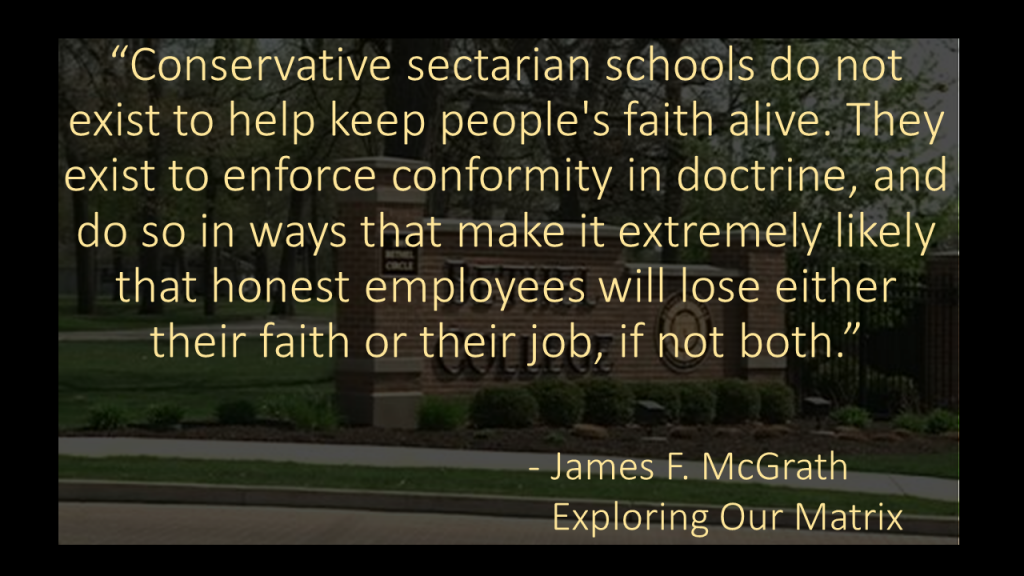 There’s been another interesting convergence of the blogosphere. Brandon Withrow shared his story of losing faith while teaching at seminary, and as a result departing from there. Christopher Skinner blogged about it, and asked what it is that leads to this experience being so common (UPDATE: see also his follow-up post about Jay Oord’s departure from Northwest Nazarene).

Meanwhile, John Byron shared videos related to a book he has put together called I (Still) Believe: Leading Bible Scholars Share Their Stories of Faith and Scholarship

I think we can answer the question of what causes people to lose their faith in contexts supposedly designed to prevent students from losing their faith. Academia is supposed to be about exploration and discovery. At conservative religious institutions, it is typically about stamping down on dissent. And so one learns not to be honest about the questions one has and the ideas one has come up with. This imposed hypocrisy is toxic to faith.

I suspect that we’ll see evidence confirming of this at Bethel College in Indiana, from which Jim Stumps resigned recently as reported by BioLogos, and whose new policy related to Biblical inerrancy was reported on by Inside Higher Ed.

I’ve said more than once that I believe that moving to teach at Butler University probably saved my faith. This non-religious context allowed me to be who I was becoming without apology or deceit – a Christian who finds views like Biblical inerrancy indefensible. The contexts in which I worked before Butler did not provide that freedom.

And so this shows something crucial: Conservative sectarian schools do not exist to help keep people’s faith alive. They exist to enforce conformity in doctrine, and do so in ways that make it extremely likely that honest employees will lose either their faith or their job, if not both.

Of related interest, Stephen Finlan has a new book out: Bullying in the Churches

July 13, 2015 Mandaean Contributions to Islamic Civilization
Recent Comments
16 Comments | Leave a Comment
"Intriguingly enough, since you mentioned "No one has suggested that Jesus was merely a carbon ..."
Chris H #JohnTheBaptist Enoch Seminar Nangeroni Meeting Day ..."
"Bestest post,..... My daughter who is incapable of being on the internet due to genetics ..."
davidt Evil In the Youth Group
"From my perspective this comes from a really problematic tendency in neo-liberal thinking to promote ..."
Chris H Jesus Wasn’t Unique
"It definitely seems memeworthy to me!https://uploads.disquscdn.c..."
James F. McGrath Evangelicals, Objective Truth, and the MSM
Browse Our Archives
get the latest from
Religion Prof: The Blog of James F. McGrath
Sign up for our newsletter
POPULAR AT PATHEOS Progressive Christian
1