America is under attack.

We can look back over the history of our nation and recall figures like William Cornell way back in 1863, or James Holmes and Dylann Roof from more recently. We can look over the list Wikipedia provides of more than a hundred rampage killers and other examples of mass violence in American history.

What do almost all the perpetrators of these violent rampages have in common? Look at their last names. Find pictures of them and look at their skin color. All of them are clearly descended from European immigrants. Europe is historically a predominantly Christian continent, and surely that cannot be a coincidence.

Perhaps we should not go back to the approach used with Native Americans and with people of Japanese descent during World War II, and begin rounding people up. But isn’t it time, at the very least, to stop those people coming to our great nation any longer, given the havoc they have wreaked here time and time again?

Presumably most readers will recognize the above as a parody of what Franklin Graham recently tweeted about Muslim immigrants. It is one of the things about racial and religious privilege that those in a dominant category have the privilege of being individuals. Whether they shoot someone, smoke marijuana, or blow something up, the perpetrators – if they are white and from a Christian background – will be viewed as atypical radicals, unrelated to oneself and one’s own ethnic or cultural heritage. But people with darker skin, or another religion, are considered examples of what “those people” are like.

I find mass shooting reprehensible. I find all shootings and murders reprehensible. But I also find the characterization of whole religious, cultural, ethnic, and other traditions with a broad brush, in a manner that one would never accept if applied to oneself and one’s own heritage, to also be reprehensible.

For more of the Franklin Graham story, see the posts elsewhere on Patheos by Hemant Mehta and Steve Neumann – two atheists whose outlook on this are noticeably more Christian than Graham’s own. Here’s the text of Graham’s tweet, for those who may have missed it: 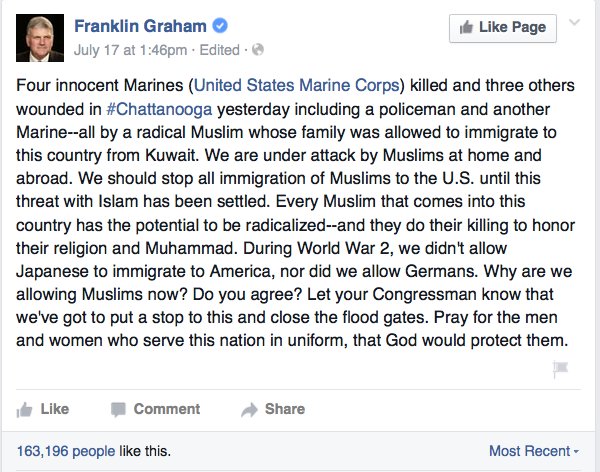