I am pretty sure I am the only person who has ever brought along William Dever’s book The Lives of Ordinary People in Ancient Israel: When Archaeology and the Bible Intersect

to read at Gen Con. There was in fact a good rationale – as I mentioned previously, I have been trying to think of historical reenactment games that can convey aspects of life and history in ancient Israel.

As I read, I found myself thinking of a range of scenarios that could be useful. Dever’s book focuses on the 8th century, and a role playing game focused on ruling Judah, dealing with conflicting prophetic messages, addressing water supply and fortifications, and coping with political tensions both between imperial powers Egypt and Assyria, and also among other vassal states such as Israel and Syria.

But then what I found on p.79 really jumped out at me, given the context in which I was reading: 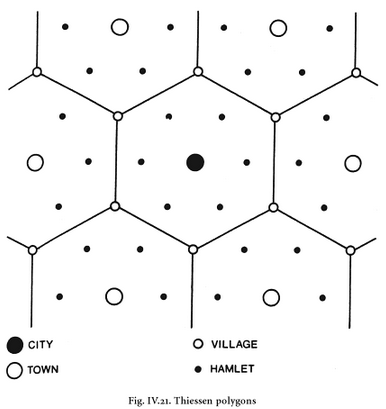 Any avid gamer will know that hexagonal play boards are common, in games ranging from Star Fleet Battles to Civilization.

What Dever was illustrating was something known as Thiessen polygons, which are a simplification of the arrangement and spread that is typical between settlements of various sizes and types.

Since I was already thinking about how to use games to teach Biblical studies and other things related to ancient religious history, this not only seemed readily gamifiable, but also reminded me that simplification for the purpose of teaching is not something that only games do, but that is always part of the educational process.

I’ll be blogging more about ideas related to the intersection of education, gaming, and ancient religion. If you have ideas, please do continue to share them here!

August 7, 2015
At Some Point God Stops Making Sense
Next Post

August 8, 2015 A Thread that Runs Through the Whole Bible
Recent Comments
12 Comments | Leave a Comment
"Sorry I didn't say congratulations right away!"
James F. McGrath Forgive Us Our Debts, Not Repay ..."
"I don't really have to. Hypocrites vigorously resist being shown to be wrong, and most ..."
Kyllein MacKellerann " QAnon Conspirituality and QAmerican Culture
"I'm not sure you'll convince anyone with that approach..."
Harold Porter QAnon Conspirituality and QAmerican Culture
"Support and responses:1> There is no means of currently making or injecting a microchip that ..."
Kyllein MacKellerann " QAnon Conspirituality and QAmerican Culture
Browse Our Archives
get the latest updates from
Religion Prof: The Blog of James F. McGrath
and the Patheos
Progressive Christian
Channel
POPULAR AT PATHEOS Progressive Christian
1