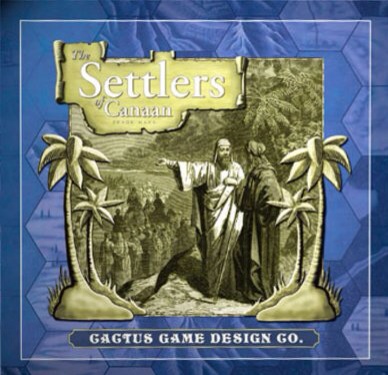 OK, so somehow I had missed, until Jeff Carter and Jonathan Bernier drew it to my attention, that there is a game which is an authorized variation on Settlers of Catan, called…Settlers Of Canaan

! I will keep an eye out for it at GenCon tomorrow.

Of related interest, Minion Games has one called Kingdom of Solomon which also looks interesting.

Much less useful looking is the Solomon's Temple Board Game

. It seems to envisage Solomon's temple being built under constant threat from invading Babylonians. There is also a Journeys of Paul board game.

There are also very bizarre Christian versions of common board games. Presumably you do not need to buy a different set in order to play “Bible scrabble.” Not the sort of thing I am interested in – I am on the lookout for games that might have some serious educational value, whether or not they could actually be incorporated in some way into a university-level class.

August 16, 2014 Evidence from Answers in Genesis that Sunday School has a Positive Impact
Recent Comments
3 Comments | Leave a Comment
Browse Our Archives
get the latest updates from
Religion Prof: The Blog of James F. McGrath
and the Patheos
Progressive Christian
Channel
POPULAR AT PATHEOS Progressive Christian
1