Doctor Who: The Magician’s Apprentice

Doctor Who returned to out TV screens this evening, and it was as full as ever of the creative mind-blowing stuff that has characterized the Moffatt era. While that era has been characterized with much that has been silly and frustrating – and this episode is no exception – it has typically made up for that by doing very creative things that draw impressively on Doctor Who’s past while managing to nonetheless be fresh and at times thrilling – and this episode is no exception. SPOILERS AHEAD!

The episode begins with a war, and a soldier who spots a child and runs after him. They find themselves in the midst of “hand mines” – hands which emerge out of the ground, a single eye on their palm, and pull you down if you move. We get the first hint about where this is when the remark is made that the war has been going on a long time, as shown by the mix of old and new technologies – something the Fourth Doctor noted in “Genesis of the Daleks.”

The soldier is sucked underground, but the Doctor shows up and tosses the boy his sonic screwdriver. The boy is puzzled by some things about the Doctor, who says, “I try to never understand, it’s called keeping an open mind.” The Doctor asks the boy his name, and the boy says his name is Davros.

How is that for an opening few minutes, just before the credits?

In a cantina, we see Colony Sarff looking for the Doctor. Not finding him there, he goes to the Shadow Proclamation. Then he goes to Karn, where we learn that his employer is Davros, who is dying. The message he has for the Doctor is that “Davros knows, Davros remembers.”

Davros has the Doctor’s sonic screwdriver. He tells his servant the Doctor has a weakness, and he should seek his friends.

Pon Earth, planes come to a standstill, frozen in time in midair. UNIT calls Clara. They have something called the “Doctor channel” which he never uses, but which is then used by Missy to talk to them. Clara goes to meet her. The Doctor, we learn, had sent his “Confessional Dial” – his last will and testament – to Missy. She says the two of them are friends. It will only open when he is dead. She wants to find him, and they discuss where the Doctor would go when he only has one day left. They track him to medieval Essex. When Clara asks how they will spot him, Missy says to look for anachronisms. Then the Doctor comes in playing an electric guitar while riding on a tank!

Colony Sarff unravels into snakes. The Doctor is shown to be ashamed – he didn’t help Davros as a child. Colony Sav votes about whether to take Missy and Clara. “We are a democracy,” he says, and so he is in fact not one being but a collective as his name implies.

The question is asked, “How scared must you be to seal every one of your own kind inside a tank?” And if Davros created the Daleks, who created Davros and made him the kind of person he became?

When the Doctor meets the dying Davros, he plays back the Doctor’s words, including the Fourth talking about the moral conundrum of whether it is right to kill a child who would later kill millions. And so there is not mere allusion to “Genesis of the Daleks,” but explicit reference and quotation.

Davros says they have been having this argument since they met, about whether Davros was right to create the Daleks. He says it will end tonight.

We learn that they are not on a floating space station, but in a building on Skaro, which had been made invisible.

The Daleks procure the TARDIS. Responding to the order “maximum extermination,” they shoot Missy. Davros talks of hunter and prey, and asks, “is this not life at its purest?” Clara is shot too. Then the TARDIS.

The episode ends with the Doctor from the future back with young Davros on Skaro, saying that he is going to save his friend the only way he knows how, and he raises a gun.

My guess would be that he plans to shoot the hand mines and rescue Davros, rather than to shoot Davros.

The episode ends leaving us with lots of questions. But perhaps the most interesting questions are the one the show asks. Who is responsible for the monster who makes the monsters? And if you had the chance to stop atrocities from occurring by killing someone and didn’t do it, would you do it if you got a second chance?

There is another prequel minisode, called “The Doctor’s Meditation,” which you can watch here: 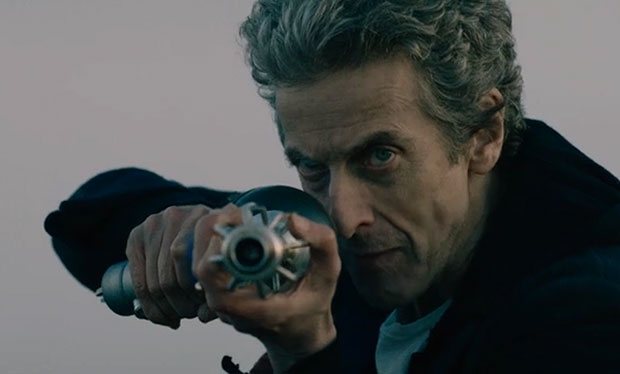