Is Heaven a Metaphor in the Bible?

There is such a thing as being too rigidly literalistic. But sometimes we fall into the opposite pitfall and treat things as metaphors when ancient people would have assumed they were statements of literal fact. I’ve mentioned the “heart” as one example in the past.

Keith Reich has been blogging about the spectrum of meanings the word translated as “heaven” has in the Bible. Here are links to part 1, part 2, and part 3 of that blog series.

I don’t disagree with him that “heaven” meant the region above us skywards and also the place where God dwells. But it seems to me that, as in the case of the heart as the location of human cognition, the two meanings overlapped completely, because just as people did not know that the heart is not literally the location where cognition occurs in the human body, so too ancient people did not think that the sky was anything other than literally the place where God dwells.

What do blog readers think? Is heaven ever purely metaphorical in the Bible?

Brian LePort also referred to the whole of Genesis 1-3 in the context of dead metaphors in the Bible, and included this cartoon: 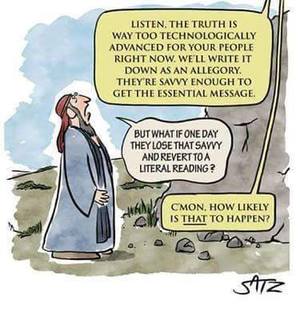