When Mike Kok shared a classroom handout which included the criteria for inclusion in the New Testament canon back in August, I created a draft post, to remind myself to come back to the canon game that I talked about wanting to make. Ultimately, the issue of catholicity or general widespread use matters most; apostolicity doesn’t depend on the name on the work but the case made for accepting the name on a work, or assuming one that isn’t there; orthodoxy can be a circular consideration, inasmuch as one can find ways of offering an orthodox interpretation of a text, or conversely, allow a text to determine what is or is not orthodoxy; and age may or may not be ascertainable, but in the case of some works in both Christian testaments, they are later than they purport.

And so now what I need are game mechanics that can reflect this. I imagine that there will be many cards that are duplicates, just as individuals and communities will focus lots of attention on some texts while others will get less attention. The aim will be to have one’s own cards agree as closely as possible with a canonical list which results from players’ combined effort at consensus. Should that result from giving cards of which one has duplicates to a stack in the center? The number of such cards in that pile, as each player places them there, could provide the points that one gets for each such card that one has in one’s hand at the end. Or we could approach that aspect another way, and have players put their cards down at the end, and the cards which everyone has are considered canonical and give points accordingly, while points are deducted for each card that one has which others do not.

The game could also be made more complex, but also more educationally useful, if the works represented on cards also have descriptors – not necessarily the same ones on each card even if it is for the same piece of literature. Each card could have one element that can be used in favor of the work, and one that could be used to argue against it. Each player can decide whether to discard cards and argue against their canonicity, or keep some and place at least one in a canon pile – or better, a group of piles – in the center, and then defend its canonicity, hoping that it will make the final list. But then we need a way that other players can argue against its canonical status are remove it from the center. Perhaps center cards could be reinforced in their canonical status by other players placing their version of the same card on top of it, and a player can also remove a card through the risky move of swapping one in their hand for one in a canon pile.

It isn’t necessarily hard to come up with a card game, and even to make it fun. The challenge is to do so in a way that can also teach something about the process of canon-formation in Judaism and/or Christianity.

Do readers of this blog have any suggestions on how the mechanics of a canon card game might work? 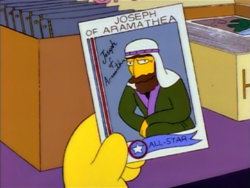 November 24, 2015
Fear of Refugees: A Timely Reminder
Next Post

November 26, 2015 God in the Hands of Angry Sinners
Recent Comments
2 Comments | Leave a Comment
"You have misrepresented what I wrote again, and you insultingly suggest that as an academic ..."
James F. McGrath Five Reasons Why Mythicism is Disappointing
"Hoot!You have become a cartoon character.You only publish in blog posts? Those are the only ..."
Sandy Plage Five Reasons Why Mythicism is Disappointing
"You weren’t willing until now to talk about whether Judaeans is a better translation of ..."
James F. McGrath “To Your Tents, O Israel!” A ..."
"Okay, you have been warned about your trolling and lowering of the tone of discourse ..."
James F. McGrath Understanding Whiteness
Browse Our Archives
get the latest from
Religion Prof: The Blog of James F. McGrath
Sign up for our newsletter
POPULAR AT PATHEOS Progressive Christian
1