This session focused on canon and fan fiction, making comparisons between science fiction and other genres on the one hand, and Biblical studies on the other. Frauke Uhlenbruch presided. My paper was up first, and it turned out there was no projector, and so my slides – which had no point to them other than to add an additional element of humor – didn't appear. I will blog about my own paper separately at some later point, and have already had some posts here that touch on the same points I made in the paper. I will also build on the paper in part of a book I am working on.

The second paper by Krista Dalton was on canon and Biblical allusions as fan fiction. The paper compared ancient scribal approaches to the Biblical literature and the modern phenomenon of fan fiction. Walter Benjamin has said that “Canon is a perception.” Midrash makes meaning by interacting with earlier texts and contemporary context, inventing the past and creating the future, in a way that mirrors fan fiction. Fan fiction has three main points of interaction with canon: a character, a gap, an allusion. We might view 1 Enoch as an example of the first, and the Genesis Apocryphon as an example of the second, while the third is the main type Dalton focused on, with emphasis on Tobit and Neil Gaiman. The latter sought to bring Sherlock Holmes and H. P. Lovecraft together in “A Study in Emerald.” Gaiman has canons in mind, but is contextualizing for a particular moment in American history, the impact of the war in Afghanistan. Turning to Tobit, Dalton mentioned Novak's description of the biblical text as a “co-author” of the work that it influenced. Novak also talks about the author of Tobit's “biblical aims.” Dalton questioned the idea that a phrase like “the two went along together” must be doing something with the biblical occurrence of the same phrase. Each culture has a limited palette of phrasing and may return to them without intending to echo earlier uses of the same terminology. And in view of that, we can understand the use of canonical texts in terms other than “authority.” Thinking of ancient texts as fan fiction might help us to view them in other ways. In the question time, someone asked about the implications of choosing Neil Gaiman as an example, since he is an established author in a way that most fanfic authors are not. Dalton mentioned a piece of fan fiction by Mallory Ortberg, a story imaging the world of Harry Potter but without Hermione Grainger doing everyone's homework.

The final paper was by Rebecca Raphael, and is inseparable from the other session the metacriticism program unit has this year, asking about the “big tent” approach of SBL and confessional scholarship. She focused on the imaginal world of Star Trek, and the last episode of the original series to be broadcast (the penultimate in production order), “Turnabout Intruder.” The sexism of the episode, and the depiction of Starfleet as one which also shares that sexism, are both controversial among Trek fans. It is interesting to see the different interpretations fans have offered of the statement that women were not allowed to become starship captains, suggesting it was a lie or a delusion. These suggestions are at odds with what Gene Roddenberry has said, and the author of the teleplay have said, as they admitted they were sexist. The later series Enterprise featured a starship Captain Hernandez. We see in all this the desire of fans to avoid having their imaginal world tainted with sexism. Raphael then made comparison with Sharon Betcher's work on disability in the Bible, which seeks to create a postmodern liberationist reading. Betcher focuses on the mutilation and disablement of victims by Assyrian conquerors, and interprets circumcision as an act of identification with slaves. Betcher then treats language in Isaiah 42 and elsewhere not as literally stigmatizing the disabled, but as symbolic of political oppression. Raphael finds this problematic as historical reconstruction, noting Betcher's language: “may have meant,” “needs to be read.” We see there, and in Star Trek fandom's rejection of a sexist interpretation of “Turnabout Interpreter,” examples of liberal or liberationist prooftexting. Historicism is used selectively in the service of constructing an imaginal world. Raphael mentioned wanting to teach a course that imagines that a religion has been constructed around Star Trek, without some of the evidence that we have, in order to illustrate what happens in interpretation and imaginal world construction. We need labels to distinguish between different activities. World construction, and secondary discourse analysis, are different activities. Practices connect with identity, and people with one identity may engage in more than one practice. In the discussion afterwards, it was suggested that appeals to ancient texts and artifacts to “prove” points is pseudo-modernist, and so it is ironic to see it used by purported postmodernism. Another person in the audience articulated a point running through all the papers in terms of fans not wanting the texts of our canon to hurt us. Raphael suggested that a trans analysis might attempt to redeem the episode, since Sandra Smith plays Captain Kirk for part of the episode.

We then had open discussion.

In my own paper, I compared scribal changes to canonical works, and authorial revision of the depiction of a character such as David between Samuel and Chronicles, with the special editions of the original Star Wars trilogy. The point was that one can agree on what works are canonical, and yet still not agree on details. This was the picture I would have put up on the screen while making that point: 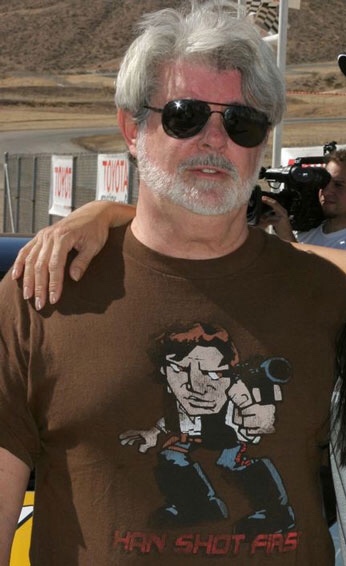 November 22, 2015 Gets The Last Word, The Dark Side Does Not
Recent Comments
3 Comments | Leave a Comment
Browse Our Archives
Follow Us!