The Fear of Doubt (Truth and Tribalism) 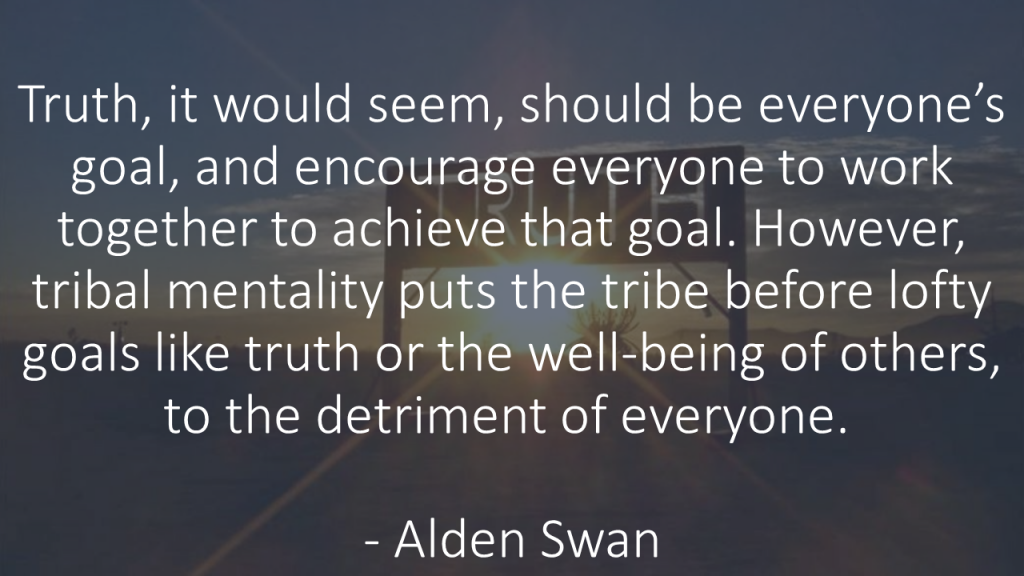 A fantastic point was made recently on the blog Atheist Revolution, defining freethought as above all else a rejection of tribalism. Here’s an excerpt from the post:

I find that one of the most important implications of freethought is that it rejects the sort of tribalism that would lead one to accept some ideas and reject others on the basis of their source. Political ideologies might provide the most striking example of this. Someone who swallows the entire ideology of one political party without question and rejects the entire ideology of another party is not functioning as a freethinker. The freethinker critically examines individual ideas and accepts those that are reasonable and supported by evidence, regardless of which party might advocate them.

Alden Swan posted a while back about the “fear of doubt.” He also gets at the way tribalism leads us to such fear. Here is an excerpt from that post, which is the source of the quote in the image:

The more fundamentalist a group gets, the number of extra qualifications for membership increases, as does the opportunities for the fear of doubt, which becomes the worst sin imaginable for the group.  Immorality, for example, can be tolerable and even forgiven. Doubt, however, is like a plague that must be eradicated. What’s worse is that these extraneous doctrines become so associated with faith itself, that when people do lose faith in, say, Creationism, or Biblical inerrancy, they will throw the baby out with the bath and walk away from Christianity altogether.

This fear of doubt often becomes cyclical: The fear of doubt, and the need to maintain control, causes leaders to insitute more rules about belief, beleiving that setting up these rules will keep doubters and non-believers out of the group. This in turn results in a strong group-think, which then causes a fear of doubt among the members, because doubt is the greatest enemy of belonging. And belonging is important. It’s so important, in fact, that the fear of doubt even plagues those who self-identify with a particular group, even if they have no direct ties (an example would be someone who is a “follower” of a TV faith preacher).

The fear of doubt can also keep people insulated from the outside world. Truth becomes secondary to the prescribed beliefs of the group, so any challange, no matter how well-reasoned or supported (like the earth rotating around the sun) is matter-of-factly rejected by the group. Truth, it would seem, should be everyone’s goal, and encourage everyone to work together to acheive that goal. However, tribal mentality puts the tribe before lofty goals like truth or the well-being of others, to the detriment of everyone.

See also Kyle Roberts’ post about Steven Davis, who deconverted from Christianity after daring to engage other viewpoints in the risky fashion that makes tribalists scared. And Wednesday Theology had a great post a while back, challenging the notion that God gets really annoyed with those who are inquisitive. Here’s a taste:

I think maybe it’s even a better expression of faith to questioningly engage with God instead of blindly following him (or what the pastor or televangelist tells you to blindly follow).I believe God gave us higher functioning brains for a reason.  I believe we should use such mental faculties and capacities in order to better understand this wondrous universe and our place in it.  What if God, in all his infinite, ineffable wisdom, didn’t give us all the answers to life, the universe, and the meaning of everything so that we could embark on the grand pursuit of discovering these things ourselves?