Swing By and Pick Up the Llamas 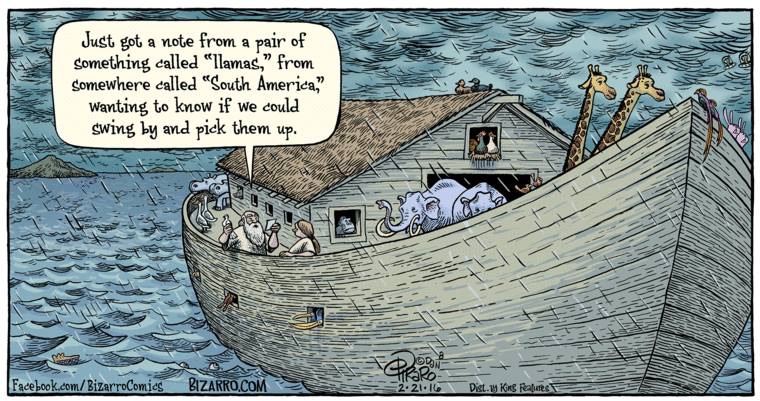 Yesterday’s Bizarro comic highlighted the absurdity of the Noah’s ark story when taken literally. One has to either have the Earth so completely changed and reshaped that it would involve a greater cataclysm than anything the Bible explicitly states or the geological record bears witness to, or one has to imagine other people in other parts of the world sending messages to Noah asking him to pick up species from their part of the world (but not themselves as humans), unless you think the llamas sent the message, which again involves positing things that are implausible (even those who believe in talking snakes don’t think they could write, do they?)

Those who insist on the literal factuality of the story in Genesis claim to be defending Scripture, and yet in order to adopt that stance they must ignore much that Genesis says, claim that it says much that it does not, and deny the Creator by insisting that the testimony of rocks and fossils leads the majority of scientists astray. Why not accept instead the Bible’s own testimony and evidence which reveals that its authors were not God but fallible humans? Why not accept the evidence from outside the Bible that indicates that the Genesis flood story is itself an adaptation of an earlier tale?

Because it is easier to make fidelity to God about believing the absurd, than to make it about what the Bible says it is about, namely radical compassion, love, giving, and self-sacrifice.

February 22, 2016 Flipping the Church
Recent Comments
3 Comments | Leave a Comment
Browse Our Archives
get the latest from
Religion Prof: The Blog of James F. McGrath
Sign up for our newsletter
POPULAR AT PATHEOS Progressive Christian
1