The morning sessions I attended both focused on John 5. We explored fascinating questions such as: whether the argument that an obedient son does what he sees his father doing requires a particular ontological understanding of divine sonship, or works equally well if it is the relational sonship of the Davidic king that is in view; whether the Son of Man in Daniel and elsewhere is a priestly figure; and whether the Gospel of John is entering into an ongoing ancient Israelite debate about whether the roles of king and priest may legitimately be combined in a single person, or must be kept separate.

After lunch we hiked up the mountain to the hermitage, and were privileged to be shown their library, highlighting particular attention on manuscripts related to the Gospel of John. One that I found particularly striking was a polyglot edition that included not only Syriac but Aramaic versions of the New Testament writings. I was also fascinated to see the Camaldoli Psalter, which is an ancient setting of the psalms. I will share photos from that excursion on Facebook when I am able to.

The final paper of the day explored whether the idea of Jesus as bridegroom in John is messianich in character, or relates Jesus to Jewish traditions about God as bridegroom. In fact, neither is obviously the case, since the texts that were preeminent in both traditions are not clearly echoed in John. I found myself wondering about both the role of Wisdom as bride (e.g. in Wisd.8) in relation to John, and also the sacramental and purification background of John 3 and whether it might suggests connections with a bridal chamber sacrament known to the author and readers. 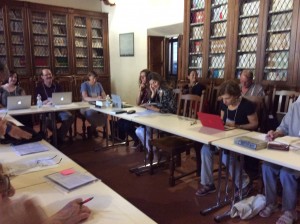