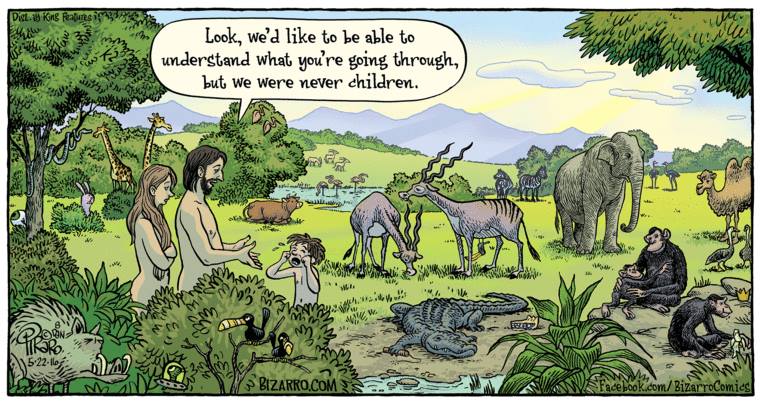 This Bizarro cartoon gets at one of the problems with the idea that Adam and Eve were created instantaneously as adults, or even as grown children. For that to have happened, the things that humans normally learn growing up would have had to have been pre-programmed into them. And that creates issues, perhaps especially for those who think that humans were created with free will, and that that is important.

If you want to create intelligent sentient beings while avoiding this problem, creation through an evolutionary process is a good solution. And so far from evolution being theologically problematic, it is theologically helpful for those who understand human beings and our creation in a particular way.

June 2, 2016 New Monograph Series NASSCAL/Polebridge
Recent Comments
45 Comments | Leave a Comment
"I don't think Paul is talking about faith vs works in Galatians 3. I think ..."
Phil Ledgerwood Grace, Works, Faithfulness, and Jesus
".........and the life that I live, I live by the faith of the Son of ..."
Nimblewill Grace, Works, Faithfulness, and Jesus
"The casting was (*kisses fingers*) perfection. I loved the characterization of all the poets-and-guests, except ..."
Von Jocks Doctor Who: The Haunting of Villa ..."
"Of note, Kautsky was not a mythicist. He regarded Jesus as a historical revolutionary type ..."
Chris H Cercetări în Istoria Propagandei Comuniste despre ..."
Browse Our Archives
Follow Us!