Let me start this round-up of recent blogging about Christology with a quote from a blog post by Larry Hurtado:

All early expressions of Christology have a “subordinationist” character, in that they portray Jesus as sent, empowered, vindicated, and glorified by God (“the Father”). They weren’t touched by the concerns and issues that arose in the 3rd century especially. But in the inventory of honorific categories to hand to them, early believers were unhesitating and remarkably free in ascribing to Jesus an unparalleled place in their beliefs and practices. The “high” Christology of the early texts doesn’t consist in saying “Jesus is God Almighty” in some simplistic sense. What’s “high” about earliest Christology is that Jesus is uniquely and programmatically linked with God, both in beliefs and worship, to such an extent that Jesus is essential for any adequate discourse about God and for any adequate worship of God.

There have been many other discussions of Christology on scholarly and other blogs lately. Larry Hurtado also wrote about how and why Jesus devotion erupted. David Capes highlighted Richard Hays’ work on echoes of the Jewish Scripture in the Gospels, which he thinks indicate that Jesus was being identified as Yahweh even in the Synoptics! See also the interview with Hays that Ben Wiherington shared.

Justin Bass recently blogged about his debate with Bart Ehrman, and from his treatment not only of Ehrman’s statements but also those of Hurtado, you can tell that the discussion has veered into apologetics. He did include this nice meme: 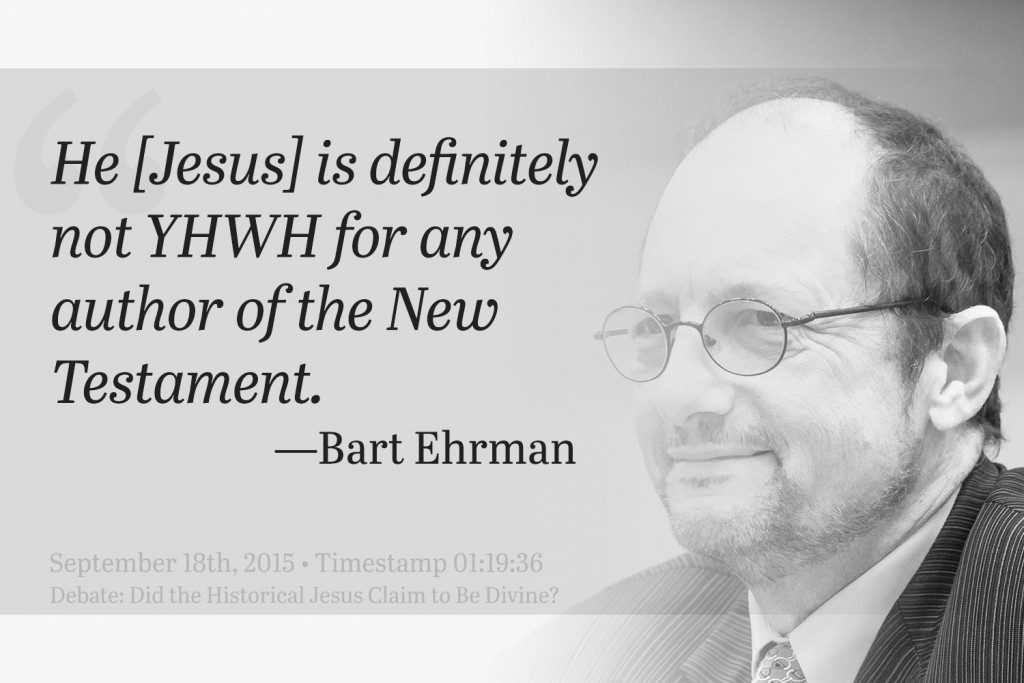 But he also offered this unpersuasive attempt to turn Jesus into Yahweh by slight of hand with semantic domains: 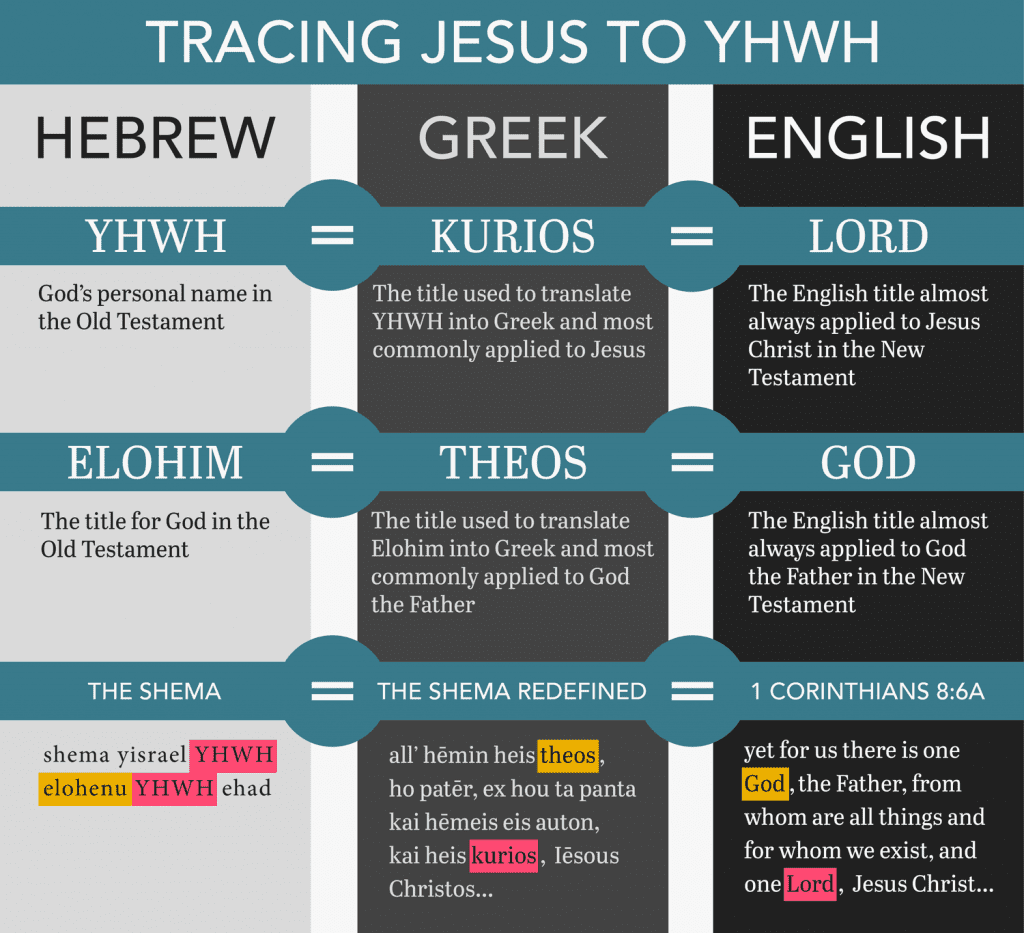 All one has to know is something about the breadth of usage of lord and even god in first century Judaism, and the problems with the above become obvious. There is so much emphasis on Jesus’ subordinate and appointed status, that one can and should say that Jesus is identified with the one God, but not as the one God, since the one God is the one who bestows the exalted status, and in some instances even the divine name itself, on Jesus.

Bill Mounce discussed the fact that John 20:28 does not use the vocative.

Ben Blackwell highlighted Colossians 2:9 as an example of interest in ontology in New Testament Christology. This was in response to a blog post by Larry Hurtado on chronology, Christology, and ontology. See also Hurtado’s post about a new book in honor of Richard Bauckham.

You may also be interested in a paper I circulated before a guest appearance at the University of Michigan, on my answer to the question of how Jesus became God.

Finally, Larry Hurtado will be participating in a discussion with Anthony Buzzard: 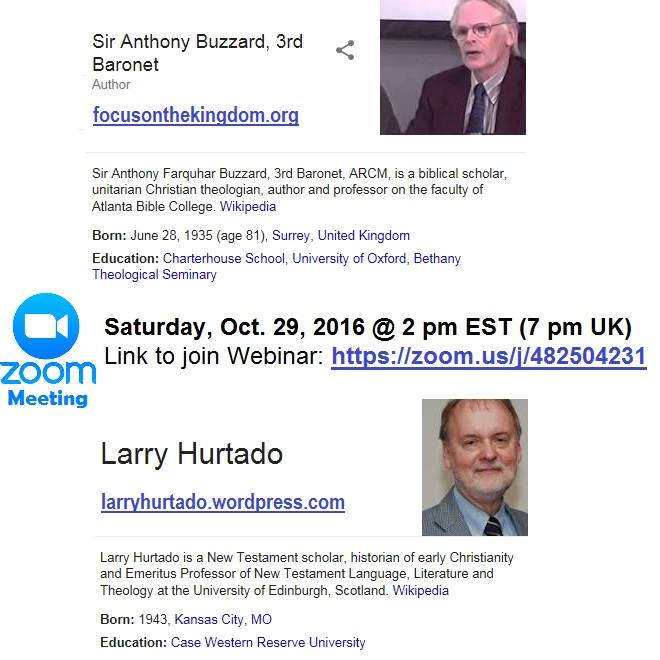 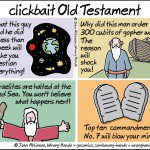 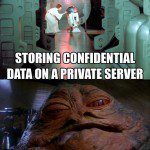 October 12, 2016 Donald Trump and Hillary Clinton: Perspectives from Science and Science Fiction
Recent Comments
74 Comments | Leave a Comment
"These fake dinosaurs are a lot more authentic to the real ones than the Creation ..."
Jennifer A. Nolan Prehistoric Planet
"I'm happy to say my Secular Frontier blog post of my interview with Edouard looks ..."
John MacDonald The Odious Penal Substitutionary Theory of ..."
"The name of the song was mentioned in the episode here is the full version ..."
dschram Entering Strange New Worlds of Star ..."
"Thank you for sharing this. Where did you learn that about the Kenyan folk song? ..."
James F. McGrath Entering Strange New Worlds of Star ..."
Browse Our Archives
Related posts from Religion Prof: The Blog of James F. McGrath

Freed from the Righteous Indignation of Others
Some years ago, publishers began demanding that authors have a media...
view all Progressive Christian blogs
What Are Your Thoughts?leave a comment
Copyright 2008-2021, Patheos. All rights reserved.