How Mythicism can Lead to Trump Support

Before anyone suggests otherwise, let me emphasize that I am not claiming that mythicism always or even regularly leads to support of Trump. Most people manage to keep their problematic reasoning compartmentalized.

But as William Clifford warned long ago, once one believes something on insufficient evidence in one area, one is setting oneself up to do so in others.

And so it is no more of a surprise to me that Robert M. Price, the mythicist, is also a Trump supporter, as he indicated both on Facebook and in a recent YouTube discussion which you can listen to here:

Price has not merely aligned himself on the Right politically. He has done so because he accepts the conspiracy theories propounded on that side of the ideological spectrum, such as that climate change is a hoax.

While certain kinds of shoddy thinking tend to be more popular at one end or the other of the ideological spectrum, the truth is that, once you are open to explaining things in terms of conspiracies and cover ups when the evidence points to a simpler explanation, there is nothing to stop you from embracing conspiracies of any sort.

The important lesson here is not “don’t become a mythicist, you might end up voting for Trump.” That combination is pretty rare. The point is not to embrace any sort of denialist viewpoint that appeals to conspiracy to support it, since whether you follow up with still more conspiracies on this or that side of the aisle, you’ll be promoting problematic approaches to knowledge, society, learning, politics, and much else. 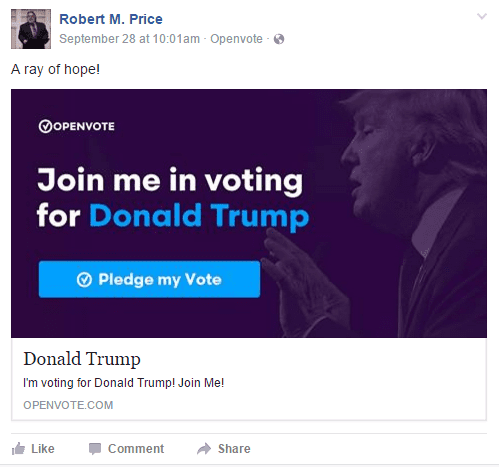 October 9, 2016
Singing Psalm 53 as the Aramaic Lord's Prayer
Next Post 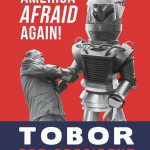 October 10, 2016 Is Democracy a Means or an End?
Recent Comments
13 Comments | Leave a Comment
Browse Our Archives
Follow Us!