Immigration and the Changing Face of America at #AARSBL16

Immigration and the Changing Face of America at #AARSBL16 November 21, 2016 James F. McGrath

I attended a Council for Foreign Relations lunch that was simply fascinating. In a recent survey, Americans were divided almost evenly in their answer to the question of whether America has gotten better or worse since the 1950s. That mirrors the different campaign slogans in the recent election: the backward-looking “Make America Great Again” vs. the embracing of a diverse future in which we are “Stronger Together.”

Two of the panelists focused in on Mexican and Muslim immigration. Many do not know that there have been Muslims in North America since the 16th century. It is also interesting that Mexican immigration has been declining.

Talking about the election, it was suggested that the result was more revelatory than revolutionary. It was suggested that religion scholars need to focus in on how racial and ethnic divides can be seen in how Evangelicals and Catholics voted. The percentage of white Christian density correlates more closely with voting for Trump than white working class does. White views also evolve depending on the percentage of immigrants in their community.

It was also interesting to hear about a previous registration of Muslim immigrants in Canada, which covered some 85,000 people, and led to no terror convictions. Amir Hussain shared that his own family lived the American dream: his parents worked in factories, and now he is a professor and his sister is an engineer. He also shared his experience of being contacted by the pastor of a Japanese church after 9/11, saying that non-Japanese Americans didn’t stand with Japanese Americans after Pearl Harbor, and so he and his congregation want to stand with Muslims.

Robert Jones also shared how there has been an increase in fear that terrorism will impact them directly. Americans are divided – although not evenly – over whether Muslim values are compatible with American values. He said that the big change for white Christians is that we used to have a melting pot that assimilated them to an Anglo-Saxon Protestant identity. Now whites are increasingly finding themselves guests at a table that no one owns.

During the question time, an important point that was made is that the Evangelical support for Trump was about nostalgia for a vision of society they feel slipping away, rather than Christian values. 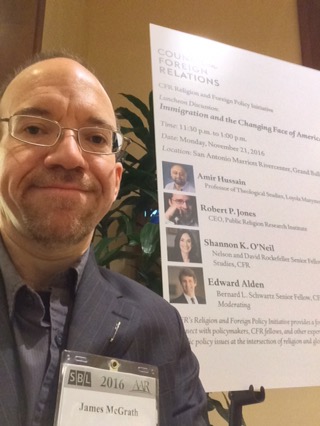 November 21, 2016
The Gospel of Jesus' Wife and Raman Spectography at #AARSBL16
Next Post 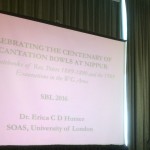 November 21, 2016 Aramaic Magic Bowls at #AARSBL16
Recent Comments
4 Comments | Leave a Comment
Browse Our Archives
get the latest from
Religion Prof: The Blog of James F. McGrath
Sign up for our newsletter
POPULAR AT PATHEOS Progressive Christian
1