What Happens When You Review Richard Carrier

A lot more has been blogged that relates to the topic of mythicism. I should begin by highlighting the article by Daniel Gullotta which is now available in the Journal for the Study of the Historical Jesus. It provoked the kind of response that one would expect from Richard Carrier, who depicted Gullotta as incompetent, but not as bad as me.

Deane Galbraith tackled the way Carrier responds to critics by using his own tools against him. First, he asked whether Carrier calculated the probability that a negative reviewer was an Evangelical using Bayes’ Theorem. He then followed up by sharing Carrier’s reply, which said – hysterically – that Christina Petterson (the reviewer in question) could be identified as an Evangelical because, among other things, she agrees with James McGrath!

As it happens, Petterson is an atheist. This isn’t just a mistake on Carrier’s part, however. It shows his strong ideological bias, and his inability to evaluate those who disagree with him either clearly or honestly. As Galbraith writes:

Petterson…is not a Christian, and not religious, and never has been. She is an atheist.

This provides a good test, however, of Carrier’s inability to interpret his sources, and his ability to draw inferences from them that are simply not there. Carrier consistently assumes that anyone who disagrees with him must have an evangelical “agenda”. Sadly, this is conspiracy-theory thinking, not scholarly thinking.

Carrier has completely failed to interpret his source, taking inferences from it that simply were not there, and which were quite incorrect.

None of this, of course, is news to those who’ve interacted with Carrier at length in the past.

Might it be possible that Jesus Christ never even existed, that the whole stained glass story is pure invention?  It’s an assertion that’s championed by some outspoken skeptics–but not, I discovered, by scholars, particularly archaeologists, whose work tends to bring flights of fancy down to earth.

See also his discussion of Galatians 1:11-12, and Philo’s reading of Zechariah, both of which also relate to mythicist claims. 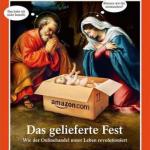 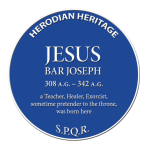 December 19, 2017 Jesus from Birth to Burial
Recent Comments
41 Comments | Leave a Comment
"I'm not sure I understood your meaning. By "top down" you mean top of the ..."
James F. McGrath The Global Faith And Media Study: ..."
"So top down control to channel the flow of a specific narrative is what this ..."
sneaker2015 The Global Faith And Media Study: ..."
"Now to get certain Christian sects to practice this.... not holding my breath."
Kyllein MacKellerann Universal Declaration of Human Rights by ..."
"Plagiarism has been around a long long time"
Bob Jonah and the Ancient Aliens’ Submarine
Browse Our Archives
Related posts from Religion Prof: The Blog of James F. McGrath