As I teach my class on the historical Jesus and work on my project related to the historical John the Baptist, I find myself revisiting the question of the historical value of the Gospel of John. One thing that is not noticed often enough is that a number of the early events and sayings that are mentioned are said to have occurred before John the Baptist was imprisoned or executed. That time frame certainly makes sense for the focus of Jesus’ activity being in Jerusalem in this Gospel. But it also offers the intriguing possibility that Jesus may still have been part of John’s movement at this stage, and that the words that he spoke may have been, if not “messages from John,” then at least more directly influenced by his mentor than perhaps some of his later words and teaching may have been. This include the statement that the temple will be destroyed, and the prediction that people will not worship on either Mount Gerazim or in Jerusalem.

I won’t go so far (at least, not yet) as to suggest that the Gospel of John’s distinctive style might owe as much to John the Baptist, if not more, as to the author of the Gospel. But the presence of similar key words in Mandaean sources, and even parables about a good shepherd and fishing, means that that idea at least deserves consideration, and is not at all as far fetched as it might initially appear. At the very least, however, the possibility that Mandaean sources can usefully tell us about the historical John the Baptist, and that the Gospel of John can usefully tell us about him as well as about Jesus, provided these sources are studied critically, are going to be major factors in the project I am currently engaged in. I look forward to talking about some of these things with students of mine, too, in my historical Jesus class, albeit in far less detail than the book will go into.

Of related interest may be posts by Scot McKnight and Bart Ehrman that relate to the Gospel of John and/or the historical Jesus. 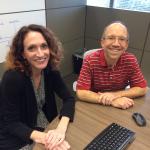 September 26, 2018 ReligionProf Podcast Episode 5 with Megan Grady-Rutledge: Digital Humanities
Recent Comments
8 Comments | Leave a Comment
"I don't think Paul is talking about faith vs works in Galatians 3. I think ..."
Phil Ledgerwood Grace, Works, Faithfulness, and Jesus
".........and the life that I live, I live by the faith of the Son of ..."
Nimblewill Grace, Works, Faithfulness, and Jesus
"The casting was (*kisses fingers*) perfection. I loved the characterization of all the poets-and-guests, except ..."
Von Jocks Doctor Who: The Haunting of Villa ..."
"Of note, Kautsky was not a mythicist. He regarded Jesus as a historical revolutionary type ..."
Chris H Cercetări în Istoria Propagandei Comuniste despre ..."
Browse Our Archives
Follow Us!