What Jesus Learned from a Samaritan Woman

The first chapter that I completed a draft of as I developed my idea for a book on What Jesus Learned From Women was the story of the woman at the well in John 4. I previously wrote an entry on that subject for the Bible Odyssey website (and I had the very cool experience the last time I taught my course on the historical Jesus of a student reading the Bible Odyssey piece and finding it helpful, only to be surprised to find their professor’s name at the bottom as its author!).

I’ll incorporate into the chapter about what Jesus learned from the Samaritan woman some thoughts that I shared previously on my blog about the theme of common ancestry, as it relates to the encounter between Jesus and this unnamed woman. In the chapter, I also discuss whether there is any reason to think that this highly symbolic episode has any connection with something that actually happened in the life of the historical Jesus. That’s particularly challenging to do for a general audience.

I was delighted when I found that Rachel Held Evans had retold the story in Inspired, in a manner that not only departs from the traditional slanders against the woman, but explicitly compares her to Tamar, as I also do in my chapter. More recently, I discovered that Efrem the Syrian also understood the story in a similar way.

Perhaps the most encouraging and yet at the same time disturbing discovery in the process of working on this project thus far is how many commentators have better insights than those one hears most often in sermons and even much academic writing about this story and those of other women in the life of Jesus. Most of those perspectives come from women, some writing mostly in other languages such as Spanish. I’ve learned so much from them. There are barriers of gender, language, and class that continue to impact our world and even the academy. There is something poignant about how the life experience of Jesus learning from women that I am writing about, and what I am learning from women myself, overlap and intersect.

Also about this story:

Episcopal Cafe had more than one piece about the story, including “Reflections on St. Photini.”

The piece on “Seeing Life in Full Color” from Red Letter Christians also relates to this.

I’m still wondering about which additional figures ought to get a mention even if only briefly. What do you think that Jesus might have learned from Simon Peter’s mother-in-law, for instance?

What to Say When Someone says Patriarchy is God’s Plan

Marvel and the Women Heroes of the New Testament

I found Peter Carrell’s comments on the issue of same-sex marriage in his own denomination helpful and balanced, and then was dismayed to find him assuming a view of the Samaritan woman in John 4 that is extremely problematic.

I am very concerned that the way in which homosexuality is made an issue in the life of churches in the late 20th and early 21st centuries has an (unintended, I am sure) effect of further marginalizing an already marginalized group within churches. If for no other reason than not wanting to participate in this further marginalization, I do not see myself leaving a church, let alone forming a new church, because of this issue.

I am also concerned at the kind of “God” and “Christ” we construct when we act and speak as though the God of Jesus Christ is displeased with a church which permits within itself plausible differences over this matter. I do not find in the gospels a Christ whose longing for the church is that it is so clear over sexuality that a disagreement is worth breaking up the church – the Christ, that is, who enjoyed dinner parties with sinners, accepted anointing from a notorious woman, and observed but did not condemn the promiscuous life of the Samaritan woman we met at the well. Yes, the same Christ of the gospels is strict on sexual morality, tough on divorce, etc, but the “whole” Christ of the gospels is not constructing a movement which will become a church which will divide over a legal matter. 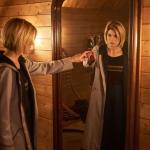 July 18, 2019 The Transgender Doctor
Recent Comments
7 Comments | Leave a Comment
"Glad you found your way here!"
James F. McGrath Donald Trump vs. the Kobayashi Maru
"The devil is a funny funny topic!"
davidt Fox News is Full of Sith
"If 'there are' 'in fact' two 'coexisting' 'universes', then whatever is trapped in one of ..."
tell me when it's over Is It Reasonable To Believe In ..."
"Just discovered this blog through a reference on a Youtube channel I follow. And what ..."
Dan McCollum Donald Trump vs. the Kobayashi Maru
Browse Our Archives
get the latest from
Religion Prof: The Blog of James F. McGrath
Sign up for our newsletter
POPULAR AT PATHEOS Progressive Christian
1