Marvel and the Women Heroes of the New Testament

Some have recently made the argument that recent Marvel movies are degrading Christian teaching on complementarianism by exalting the heroic powers of women. Here’s a good solid response to that contention.

At 10am on Friday, my wife and I sat down in plush, reclining movie theater chairs, armed with popcorn and Kombucha, to watch the 182-minute event known as Marvel’s Avengers: Endgame. No spoilers ahead (I promise!), but we were dazzled by the scope of this film, where literally dozens of heroes assembled to protect good and vanquish evil. It is a ground-breaking film on numerous levels, but we were especially taken back by the many powerful women heroes of many sizes, shapes, and origins.

I grew up with a few female heroes like Wonder Woman, She-Ra, and the women of X-Men. But by and large sci-fi and hero stories of the 1980’s featured an intrepid man rescuing the proverbial damsel in distress. Some Christians find this 21st century spotlight on women heroes to unbalance appropriate gender roles. But in the New Testament we actually find heroic imagery frequently applied to the work of women leaders, and in a way that looks a lot like the team spirit of the motley crew of the Avengers.

In his letter to the Philippians, the apostle Paul commends two women, Euodia and Syntyche, who were Christian leaders on the frontlines of the gospel mission. He refers to them as “contending,” or fighting, side by side with him as ministry co-workers (Phil 4:3). The same language he uses for them, he uses also for all his co-leaders, like Timothy (Rom 16:21). The imagery Paul uses for these women resemble a troop of soldiers marching lockstep into danger, battling side-by-side, relying equally on the support of the other.

We do not know exactly what leadership activity these women carried out, but we have every reason to believe they had “frontier” mission roles. For example, in Romans Paul commends the ministry leader Junia and her husband, Andronicus (Rom 16:7). Paul mentions that these two had also shared prison time with him. Imagine that. Why would Rome incarcerate a woman unless she posed a threat to the state? And here is the kicker—Paul doesn’t say she was just a fellow “prisoner,” but a “prisoner-of-war” (synaichmalotos). Elsewhere, Paul only refers to two other people as fellow “prisoners-of-war” (Phm 23; Col 4:10).  Heroes of the faith indeed, captured in a spiritual battle for the literal fate of the world.

Was it strange for Paul to refer to women as brave warriors? Paul may have been inspired by the judge and prophetess Deborah who led the Israelites into battle along with Barak, and afterwards they sang a victory song (known as the “Song of Deborah”; Judges 5). Or closer to Paul’s time is the legend of a faithful Jewish mother and her seven sons who were captured by the tyrant Antiochus IV who threatened them with torture and death if they did not renounce their religion. Six brothers are killed before their mother’s eyes. When Antiochus tells her to convince her youngest and only living son to spare his own life, instead she tells him to bravely die in honor of the One God. And so it happens, and she is martyred last of all. By one Jewish account she is hailed as an example of courage and endurance even among men (4 Macc 15:30). She is dubbed “soldier of God” who defeated a wicked and powerful tyrant (4 Macc 16:14).

In Revelation 12, we see the story of the incarnation presented in fantastic and apocalyptic terms. Mary wears a robe made of the sun, and a crown of stars. On the verge of giving birth, she is confronted by the Red Dragon. She cleverly evades the Dragon—fighting is not the only weapon of a warrior. Mary safely births Jesus and he triumphs by his blood. Mary is hunted again, and survives. Mary is attacked by the Dragon, not because she is a harmless victim, easy prey, but because she is dangerous, envoy and protector of heaven’s secret weapon. Christian art has long portrayed her as the “Warrior Queen,” identifying her as the ultimate example of the “woman of valour” (Proverbs 31:10).

When I think about Euodia, Syntyche, Junia, and Mary, my mind turns to Hebrews 11. If the Bible were a museum, Hebrews 11 would be the “Hall of Heroes.” There would be hundreds of statues lining the hall in honor of bold faith and self-sacrificing love. Hebrews mentions martyrs who were stoned, thrust with swords, and even sawn in half (Heb 11:37)! The text mentions Old Testament patriarchs and prophets, and it points to Christian apostles and leaders as well. The women warriors that Paul mentions stand proudly in that hall, and no doubt countless more unnamed heroes, women and men, whom we can admire for their courageous faith and their roles in fighting the good fight so we too could have our happy ending. 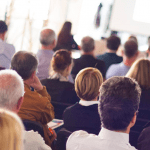 What is Pentecost? Why Does It...
Mark D. Roberts
Related posts from Jesus Creed