Doctor Who: The Creature from the Pit

Doctor Who: The Creature from the Pit August 7, 2019 James F. McGrath

Time to get back to (and hopefully wrap up) blogging through the classic series of Doctor Who. For those who’ve been following along, I still have a few Tom Baker episodes left to cover. And so let’s resume with “The Creature from the Pit.”

This episode can be challenging to watch simply because of the fact that the voice actor who provides the voice of K-9 is different than in previous episodes, and it takes some serious getting used to. I still haven’t. But for those who can get past that, there are some wonderful moments, particularly early on, for those of us interested in ancient mythology and religion. Cleaning out #4 hold in the TARDIS, Romana discovers a ball of string that the Doctor says belonged to Perseus and Ariadne, as well as the jawbone of an ass, in connection with which the Doctor tells Romana, “Don’t be a Philistine.” There is a fair amount of poking fun at astrology. Yet there is also an astrologer whose admittedly vague predictions included Lady Adrasta receiving visitors from beyond the stars – an idea that others in that society scoff at. Classic Doctor Who regularly does this – scoffing at myths and religion in one sense, and yet affirming the literal historicity of stories which the Doctor participated in on the other. Perhaps more profound, and intersecting with but not limited to religion, is the focus on not judging by appearances, and the challenge to recognize the person in the seeming monster as well as the monstrous in the human or humanoid person.

For more about this episode, see Elizabeth Sandifer’s piece in which she explains, “Essential to this story is the fact that at first glance it looks like something other than what it is.” It is by no means the first episode to challenge viewers by leading us to assume that the humanoids are the good guys only to reveal that the situation is different. “Galaxy 4” did that way back in the era of the First Doctor (I blogged about “Galaxy 4” many years ago). There are reconstructions of the lost parts of the story on YouTube.

It is the 4th episode that really gets at this theme.

While we’re on the subject of Doctor Who, here are a few links that are of general Whovian interest, even if not directly related to this episode. First, here are three from IO9: A brief history of Doctor Who’s missing episodes, Big Finish celebrating 20 years of Doctor Who audiobooks, and a new audio adventure featuring the Seventh Doctor that sounds like it will be great. Here’s the trailer:

I discovered that a Butler University graduate has specialized in the study of Doctor Who music!

There was also a startling revelation about a different famous Doctor Who creature and how it was created, as revealed by Jon Pertwee’s son.

Finally, even more tangentially related, AtheistRev talked about time travel and Christianity. That is, of course, the focus of my short story “Certainty” which was published in my book Theology and Science Fiction. The prompting to write that story came from a thought experiment I was asked by an atheist to try, one that involved a TARDIS or other comparable time and space machine. And so I guess this isn’t as tangentially related to Doctor Who as I suggested, although it doesn’t have a direct connection to this episode… 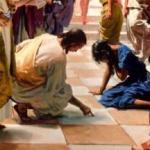 August 6, 2019
What Jesus Learned from a Woman Accused of Committing Adultery Alone
Next Post 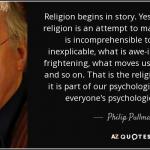 August 8, 2019 Call for Abstracts: His Dark Materials and Philosophy #CFP
Recent Comments
0 | Leave a Comment
""The Secret Jewish Roots of Star Wars (or some other top franchise)""or some other top ..."
crackerMF #CFP Jewish Science Fiction and Fantasy ..."
"I'm merely questioning your assertion of "very powerful evidence of basic uniformity" and asking you ..."
robrecht The Aims and Ending of Luke-Acts
"I don't follow this. I was responding to thisIt's hard to say how uniform the ..."
Mark The Aims and Ending of Luke-Acts
"We can infer anything and then the inference become real . In science it becomes ..."
davidt Duel of the Antichrists
Browse Our Archives
get the latest from
Religion Prof: The Blog of James F. McGrath
Sign up for our newsletter
POPULAR AT PATHEOS Progressive Christian
1