Since James Blish published his novelizations of Star Trek episodes (Bantam, 1967sq), over 840 tie-in novels, anthologies, novelizations, and omnibus editions have made their way to fans eager to follow the continuing adventures of their favourite Starfleet officers and aliens. Though none are to be considered canon, Star Trek tie-in books have supplemented the franchise, providing more stories starring favourite and original characters, furthering plotlines and helping to tide fans over in the years between series and movies. Their authors too have sought out new life and new civilizations.

Tie-in novels have had a significant influence on Star Trek fandom, especially on fanfiction, providing in-depth biographical and psychological information on beloved characters. In a fundamental way, these books have shaped the way fans understand Star Trek; these authors stand as nearly equal builders of the Star Trek franchise as Gene Roddenberry, his producers, and the creators and producers of later incarnations. For example, character details of William Rostler’s, Diane Duane’s and Vonda N. McIntyre’s novels have since been canonized, such as McIntyre coining Hikaru Sulu’s first name (The Entropy Effect, Simon & Shuster, 1981). Della van Hise’s Killing Time, and the scandal surrounding the heavy homosexual subtext of its first printing (Simon & Shuster, 1985), helped cement the foundational fanfictional slash pairing of Kirk and Spock, one that had previously mostly existed in the underground of fandom.

We invite researchers to send 300-700 word essay proposals, due before 31 October 2019. We anticipate final essays of about 8000 words relating to Star Trek tie-in fiction, including but not limited to the following:

– The episode and film novelizations and similar para-canonical fictions;

– The relationship(s) between the novels and fans, the novels as source parallel to canon;

– Studies of any specific series or novels;

– The children’s/YA novels and novelizations;

– Genres and genre boundaries in the Star Trek novels;

– Translations into languages other than English; the original German tie-in books;

Please send proposals and a short bio, including contact information, to stnovelsbook@gmail.com by 31 October 2019. 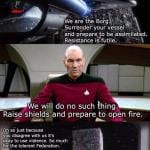 September 11, 2019 The Borg, the United Federation of Planets, and the Paradox of Tolerance
Recent Comments
0 | Leave a Comment
Browse Our Archives
Follow Us!