From an interview in USA Today with Guillermo del Toro:

His religious grandmother instilled a passion for both the supernatural and separating right from wrong. “It was a lot of Catholic scare about sin and hell. ‘You’re going to be in purgatory if you’re not careful, and blah, blah, blah … Maybe even if you are careful!’ ” he says with a laugh.

“I’m eager to explore themes that lend themselves easily to metaphor,” he says. “The fantastic is the only tool we have nowadays to explain spirituality to a generation that refuses to believe in dogma or religion. Superhero movies create a kind of mythology. Creature movies, horror movies, create at least a belief in something beyond.”

There’s more about religion in other parts of the interview not quoted here. Of related interest, Steve Wiggins wrote,

Those of us who study religion professionally have been taught to call the blending of religions “syncretism.”  I’ve stopped using that word for it because it assumes that there are pure forms of religion.  Religion always takes on an individual element.  We make it our own when it gets translated into our personal gray matter.  The idea that there is a pure form of any religion requires an arbiter of greater rank than any here on earth.  You can always say “but I think it means…”  Horror, I suspect, latched onto this truth long ago.  Without some hint of doubt about your own individualized belief system, it’s difficult to be afraid.  Horror need not be about blood and gore.  Often it isn’t.  Often it’s a matter of asking yourself what you believe.  And once you answer it, opening yourself to asking questions.

I’ve never been a big fan of the horror genre. Even those works that are both horror and sci-fi grab my interest less than other science fiction works. But I can appreciate nevertheless the ways that horror is interesting and important for those who study the intersection of theology and popular culture. Some early modern works in the horror genre, like Bram Stoker’s Dracula, are woven through with elements that are theologically interesting, and the entire worldview that horror presupposes has theological implications.

Of possible related interest, take a look at the Encyclopedia Mythica online! 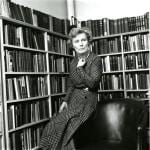