I’ve been looking forward to sharing this podcast for a while Meredith Warren for a while. We had a conversation about her work on hierophagy, which for those who might not recognize the Greek roots of the word is “sacred eating,” i.e. eating that not only has some sort of vague or highly symbolic religious connotations such as is familiar to at least many today, but eating that was thought to mediate an actual encounter and ingestion of a reality that properly belongs to another realm. We talk about, among other things, the TV series Good Omens which features a fair amount of attention to angelic eating.

Since talking with her, some thoughts occurred to me that intersect with another area of interest of mine. What are the implications for the historicity of Jesus of the fact that he is said, often simply in passing, to have eaten. (I’m of course addressing here those with the extremely fringe view that denies there was a historical Jesus). If Jesus were thought to be an angelic or some other kind of otherworldly being, surely his consumption of ordinary human food would have been considered at least noteworthy, and perhaps controversial.

Jesus’ vow of abstinence and other related words at the last supper are also interesting to consider in this regard. Does it tell us anything about what Jesus expected as far as the kingdom that was to dawn? That people would eat in it is unsurprising given Jewish expectations. But would it be human food, or would it be something else because humans would take on a new existence? Are there any clues? Jesus’ meal practices seem to foreshadow the eating that would ensue in the kingdom he spoke of. Does it give us any clues to its character?

I also find myself thinking about the theology of resurrection and the scenes involving Jesus eating.

There are so many interesting thoughts that continue to be generated by Meredith Warren’s book Food and Transformation in Ancient Mediterranean Jewish Literature and my conversation with her about it. And so hopefully you can tell that I highly recommend it!

Hungry (pun intended) for more? Here are some links you’ll want to explore:

AJR on Food and Transformation in Ancient Mediterranean Jewish Literature.

Fittingly, there is a call for papers about Food: Sacrificial, Spiritual, and Secular.

For those who need more podcasts to add to their playlist, Deirdre Good shared Podcasts for Preachers, Pundits, Parishioners, and Public Proclaimers, and Mike Bird also appears to be launching a podcast.

Finally, here’s a previous post of mine relevant to this one:

I Can Only Imagine Leviticus In The Good Place 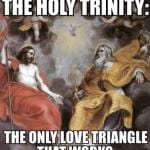