The Bible and the Bechdel Test

I found myself thinking of the Bechdel Test as I worked on my book What Jesus Learned From Women, and contemplated mentioning it in the book. For anyone who may not be familiar with it, the Bechdel Test applies three criteria to a movie: (1) it has to have at least two women in it, who (2) who talk to each other, about (3) something besides a man. That’s surely a minimum standard to which any story should be held.

The Bechdel Test has been applied to at least one movie about the New Testament, The Gospel According to St. Matthew. It met only one of the three criteria.

There have been attempts to apply the criteria to the Gospels themselves as texts. Rev. Emily Payne found the Gospels of Mark and Luke to pass the test. Kate Keefe’s blog about the Psalms also takes a look at this topic.

Jesus and women; or the Bible and Bechdel

The Bible and the Bechdel test

Benjamin Harris on the Bechdel Test and the Gospel of Luke

From Dr Who to the Bechdel test of the Bible

If applying the Bechdel Test to the Bible seems anachronistic to you, what about applying the Enneagram to Mary Magdalene?

The New Testament’s focus on Jesus obviously makes it explicable that women are not found to have conversations that are not about a male character. That doesn’t make the issue of patriarchal silencing of women in these texts less of a problem, but it is worth noting as an explanation of why the New Testament does so poorly when evaluated through this lens. Everyone is depicted as talking about Jesus.

For an exploration in the Jewish scriptures/Old Testament see Bob Cornwall’s reflection on Hagar and his review of the new book Defiant.

This piece on the Beyonce Mass is also somewhat related to the theme of this post. So too is a new book about Jesus and John Wayne. But let me end with one that brings us back to the New Testament, and a conversation between two women. Although I do also have to mention a book that may be of interest:

Holding Up Half the Sky 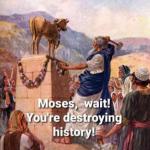 June 29, 2020 Doctrinal Idols
Recent Comments
0 | Leave a Comment
"That's kind of a weird coincidence but I was just commenting on the extraordinary claims ..."
John MacDonald Extraordinary Claims and Extraordinary Evidence
"I think it's Rudy Guiliani (seen here https://www.youtube.com/wat... interacting with a famous friend of Jeffrey ..."
Choose Wisely Kirk Cameron at the Indianapolis Public ..."
"I just did a blog post that, in part, argues for a late date of ..."
John MacDonald Rethinking the Dates of the New ..."
"Thank you Professor McGrath!! What has happened at so many universities in the U.S. and ..."
Daniel Wilcox The Freedom to Be Offended and ..."
Browse Our Archives
Related posts from Religion Prof: The Blog of James F. McGrath